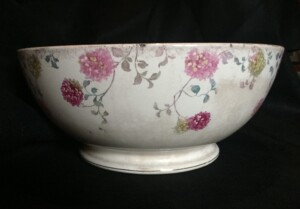 At the Rosson House, it’s true that we don’t have much in our collection from the Rossons – just their pictures, and anything we can glean from newspapers and other public documents and primary sources from the time. It’s also true that the majority of the pieces of our collection are not from any of the other families that lived in the home – a few objects from the Goldbergs, Higleys, and Gammels (and just one from our famous Rosson House renter, Whitelaw Reid) have made their home back where they once were, 100 or more years ago.

That seems to be how things are – people move, belongings are given away or are discarded or lost. Over the years these objects lose their importance, as well as their context and sometimes even their identity. Part of what we do as historians is help preserve those stories for people, places and things, as best we can, and even to solve mysteries and restore lost or forgotten stories.

In the 1990s, the City of Phoenix discovered more about the history of the Heritage Square area through an archaeological dig, primarily where the Heritage Garage and the Arizona Science Center now stand. In their search for signs of life, they found architectural evidence of 20 prehistoric structures that included floors and hearths, postholes and pits; and historic evidence that included foundations, walls, septic tanks, wells, privies, and pits. Through this dig, they uncovered historic artifacts dating back to the City’s earlier years, and prehistoric artifacts dating back to the 1st-5th centuries CE. 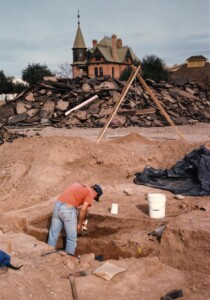 Archaeologist at the Heritage Square dig, with the Rosson House in the background. (c1995, Pueblo Grande Museum collection)

With the prehistoric finds, there were no records of who lived in this area they now call Pueblo Patricio. After being around for at least a millennium (including the previous 150 years of indiscriminate digging, building and general disrespect of the artifacts and culture they represented), some archaeological finds were mere suggestions of what had been there before. What the City did find though, told them more about how these ancient people lived – the kind of pottery and tools they used, the food they ate, the fires they built, and even (through an analysis of pollen found at the site) the kinds of plants that were around at Heritage Square a thousand years ago.

With the historic finds, they had some help – Sandborn Fire Insurance Maps showed them where buildings and outbuildings were originally located, and sometimes what they were made of; property records, the census, and the city directory showed them who owned the land and who lived there. The City excavated over 34,000 individual historic artifacts from the site, including everything from spoons, broken glasses and dishes, to wine and medicine bottles, spectacles, an old alarm clock, broken toys, and a military pin. In one of the excavated privies, they even found two lead markers or plaques that commemorated the lives of Bertha A. Shaver (b.1862 – d.1882) and William Y.T. Smith (b.1879 – d.1883), both family members of John and Ellen Smith, who lived in a beautiful two-story home at 517 Adams St. (about where Create at the AZ Science Center stands today). How the markers ended up in a privy, we have no idea. There are some mysteries that haven’t yet been solved!

Currently, the markers, pottery sherds, and all other artifacts from the Heritage Square archaeological dig reside in storage at Pueblo Grande Museum, as do all objects from historic and prehistoric excavations in the City of Phoenix. We were lucky enough to be able to display several artifacts from the dig in our 2018 Rosson House exhibit, Plate Expectations: Victorian Dining, Decorum and Dishes, showing our visitors what kinds of dinnerware the people living in the Heritage Square neighborhood at that time were using. These are plates, cups, glasses and utensils that the people who lived across the street from the Rossons, Goldbergs, Higleys and Gammels were using, and may have even been used by the occupants of the Rosson House themselves, at a dinner party or luncheon! Also on display was some of the prehistoric pottery found at Heritage Square, as the Rossons certainly weren’t the first people to live and eat on Block 14. You can see pictures of the exhibit on our Previous Exhibits webpage. 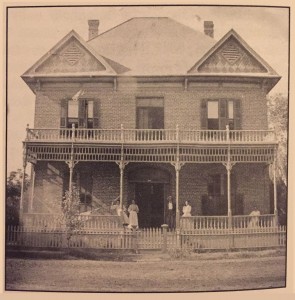 John and Ellen Smith’s house on Adams Street. (from The Historic Archaeology of Heritage Square, by Mark E. Hackbarth)