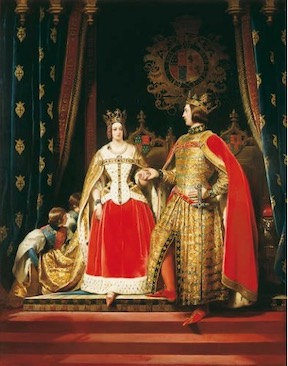 Queen Victoria and Prince Albert in their medieval cosplay. By Sir Edwin Landseer, 1846.

Just as we look back to the Victorian Era, people of the 19th century were looking back to an even earlier period of history – namely, the Middle Ages (500-1500 CE).  What is now termed “Victorian Medievalism” or the “Medieval Revival” was a cultural movement that encompassed art, architecture, politics, literature, and even facial hair!  It admired and drew inspiration from the Middle Ages, which were perceived as being a purer time, both spiritually and aesthetically.   Growing out of the earlier Romantic movement and the architectural Gothic Revival, it was largely prompted by a dissatisfaction with industrialization and the social upheaval that came with it.  Many people felt the urge to flee the atmosphere of a polluted, factory laden city for an idealized vision of the past, one filled with feudal order, chivalry, and splendor.

Some felt this urge so strongly that they put it into physical action:  In 1839, Archibald Montgomerie, Earl of Eglinton, infamously held a full-scale tournament where 100,000 spectators gathered in the pouring rain and sleet to watch aristocrats (in armors borrowed from the Tower of London!) utterly fail to strike one another with lances.  The event did succeed in becoming a cultural sensation, and three years later, Queen Victoria herself would hold a fancy dress ball in medieval costume. 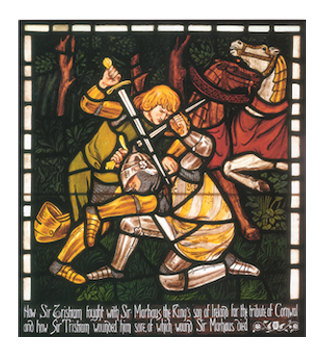 One of the most vibrant and well-known expressions of 19th century medievalism was the Pre-Raphaelite Brotherhood.  This loose association of seven British artists formed in 1848 to reject the “mechanistic” teachings of the Royal Academy of Art in favor of an aesthetic reminiscent of 15th century Italian art.  Working in painting, sculpture, print, and stained glass, their style united vibrant colors, luscious details, and a celebration of nature.  While much of their subject matter was ecclesiastic in nature, the Brotherhood and their later adherents, such as Edmund Leighton, Marie Spartali Stillman, and John William Waterhouse, would also depict themes from literature, including Arthurian romance. 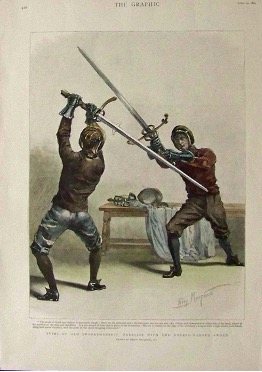 This was also a period of medievalist literary activity.  Classics of historical fiction like Sir Walter Scott’s Ivanhoe and Alred Lord Tennyson’s Idylls of the King shaped popular perceptions of the middle ages and chivalric virtues.  Naturally, these virtues would be brutally satirized by Mark Twain in his A Connecticut Yankee in King Arthur’s Court. 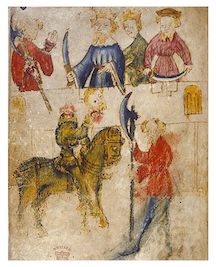 The Victorian era also saw the first translations and publications of rediscovered medieval works such as the 10th century Beowulf and 14th century Sir Gawain and the Green Knight.   This year, our holiday decor takes a cue from Gawain’s Christmastide adventure. Our tree is adorned with moss and Gawain’s green-and-gold enchanted belt, while the Green Knight’s “fearsome axe” sits nearby. See it and our other medievalist themed decor all month long at the Rosson House!

For more fun history about the holidays, read our blog articles:

Christmas in Victorian Phoenix, Decking the Halls, and Lighting up the Holidays.

If you enjoy reading Heritage Square’s History Blog each month, please consider donating to Heritage Square to support our blog and our other educational programs, activities, and events. Make your contribution on our website, or send a check to us at: Heritage Square Foundation, 113 N. Sixth St., Phoenix, AZ 85004. Thank you!