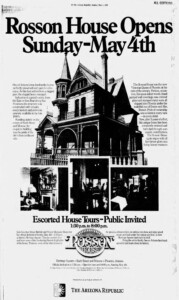 May is National Historic Preservation Month. This May also happens to be the 40th anniversary of the opening of the Rosson House Museum, and this year is the 125th birthday of Rosson House. That’s a lot to celebrate! Or, it would be if it hadn’t come in the middle of a worldwide pandemic. Now, it feels like a signpost on an uphill climb that somehow turned from an ordinary, sometimes bumpy hill, into Mount Everest on its worst day, when you don’t know what the future holds or if it even exists beyond that signpost.

That statement may make you feel uncomfortable. You may feel that the news is too depressing or overly dramatic, and that you only want interesting historical information from us in these articles. But the facts of the matter are that these hard truths do exist – that Heritage Square has missed revenue from what is usually its busiest months of the year, that the normally lean months of the summer will likely be even worse, and that, if the fall months continue this trend, Heritage Square may cease to exist. We have already furloughed over half of our staff, and the remainder are on alert to expect furlough within the next week. It’s difficult to find the ability to celebrate with that looming on the horizon.

We wouldn’t be the first museum to close during this crisis. That dubious honor goes to the Indianapolis Contemporary Art Museum, who closed its doors permanently in April, “Due to economic damage from the coronavirus.” The New York Times is estimating that 10% of museums will close permanently because of fiscal losses due to COVID-19. We wouldn’t even be the only history museum in Phoenix to close due to financial hardships – the Phoenix History Museum (our former neighbor) permanently closed during the recession in 2009 because their budget was cut and they didn’t have enough money to operate.

We wish we had an article for you with fun tidbits about what people thought of this beautiful local landmark over its 125-year history (like when the LA Times reported that Whitelaw Reid was renting the House and they included a sketch of a completely different home – oops). Or even something informational and timely about how Phoenix dealt with the influenza outbreak a century ago (for example, because Arizona was already 3+ years into prohibition when the epidemic hit, the sheriff re-distributed confiscated whisky to flu patients who were able to obtain a prescription from their doctor). But we don’t.

Instead, we have this plea to you – please, look at the Rosson House. Really look at it, and imagine what our city would look like without it if it hadn’t been saved and restored in the 1970s. And imagine it now, if it wasn’t a museum, and you couldn’t go inside and get a glimpse of Phoenix’s past. If all the work that was done to create this unique place was lost, and instead it became someone’s office or, (a million times worse) was torn down to give way to a high-rise or parking lot.

It could happen. But, with your support, it may not.

What can you do to help?