Lighting up the Holidays

The first person to electrically light their Christmas tree was Edward H. Johnson, Vice President of Thomas Edison’s Electric Light Company, in 1882.  There were 80 red, white and blue lights he hand-wired in a string and put around the tree.  The tree was then put on a rotating platform, and both the platform and lights ran on generator power. Not quite up to our Clark Griswold standards today, but when you think of what else was available to people at that time (candles with open flame!), truly innovative in both creativeness and safety. 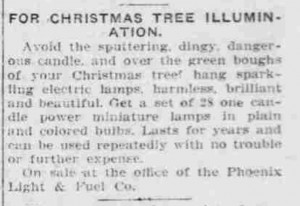 By 1895 (the year Rosson House was built), President Grover Cleveland had the first electrically lit tree at the White House, and the practice of using electric lights on your Christmas tree started taking off – for people who could afford them. Electricity wasn’t regularly available (or always reliable) at that time, and the lights were pretty expensive – a string of 16 lights sold for $12 in 1900, which translates to approximately $350 today. Doing a little searching around the internet, coupled with a little math, that would mean that it would have cost the Griswold’s over $18,000 dollars to light their 25,000 Christmas lights at the turn of the century! For reference, that’s more than twice what the Rossons spent to build their house in 1895.

We’re not sure when Arizona first had Christmas tree lights, but the Arizona Republican (now the Arizona Republic) shared the Phoenix Light & Fuel Co. ad pictured below for Christmas tree illumination on December 22, 1903.  In the 1908 Sears & Roebuck Catalog sold the individual lights, or “lamps” pictured at the top of the page, either plain or in fruit shapes (!!), along with a battery to connect them to, to power them. 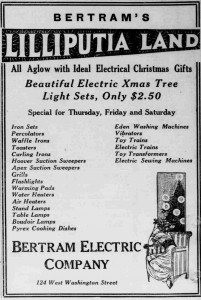 By the 1920s, newspapers were filled with ads for Christmas lights, mostly sold by electric companies like this one from the December 23, 1921 Arizona Republican:

Whether your lights are more like Edward Johnson’s,  or Clark Griswold’s, or somewhere in between, we hope they serve to brighten the season, and bring warmth and comfort to your hearts.

Show your support by shopping at our online museum store, become a member, or donate to help support our mission.