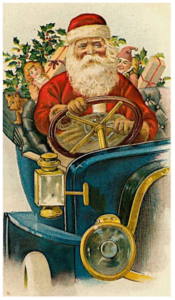 As we make our way through the season, decking the halls within an inch of their lives and singing along with 24/7 Christmas radio stations, it’s interesting to look back and see how the holidays were celebrated at the turn of the century. We’ve looked through several issues of the Arizona Republican newspaper (now the Arizona Republic) to get a better idea of how the people who lived in the Rosson House experienced the holidays. Here’s what we found:

You can find out more about Victorian holidays here, and about how they lit their Christmas trees here. Smithsonian Magazine has a great article about the history of the Christmas card here – it’s just what you need to procrastinate filling out your own holiday cards!

Whether you’re a procrastinator or not (and we definitely are) – have a happy and healthy holiday, and we hope to see you soon at the Square!