We’re flush with information for this month’s blog! Our free time really went down the drain because of all the research we did. We are definitely wiped out. (Sorry, folks, this blog is really in the gutter today – literally!) 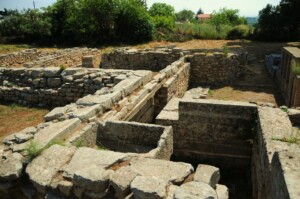 Evidence of organized sewer and drainage systems date back to the Bronze Age, more than 5,000 years ago. The people of the Indus Valley in Asia and Crete in the Mediterranean were considered pioneers in developing basic sewer and drainage technology, emphasizing sanitation in urban environments. Ancient Romans, Mayans, Egyptians, and Chinese civilizations all show evidence of working water systems with cisterns, ditches, canals, and aqueducts, but also including sewers and drainage with pipes made of stone, clay/earthenware, and even lead and copper. The birth of “modern” water and sewer systems in the mid-19th century used much of the sanitation technology developed in ancient times. (The extensive Phoenix area canals are an excellent example of this – built by the Ancestral Sonoran Desert Peoples beginning around 2,000 years ago, and dredged out by the Euroamerican settlers in the mid to late 1800s, with some still in use today.)

Sewage during the 18th and 19th centuries became increasingly more of a problem in Europe and the United States, particularly in fast growing urban areas. Rivers and other waterways had been used as open sewers for centuries at the same time as they were also used as sources of water for drinking and bathing. Sewage also seeped out of privies, cesspools, and septic tanks, and into wells and other water sources. Lack of adequate sanitation systems lead to outbreaks of typhoid and cholera, as well as other waterborne diseases (though at the time most still still thought of them as disease spread by miasma, or bad air, instead of through contaminated water). Early sewers were more for rain and snow runoff drainage than for wastewater. 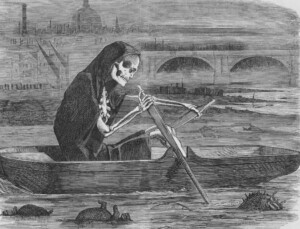 Many of the first sewer systems in the United States were private businesses, owned by individuals instead of municipalities, including here in Phoenix. In 1889 the Phoenix Water Works Company was established, providing water from local wells and piping in water from the Verde River (water from the closer Salt River was too salty, as the name suggests). The Arizona Waterworks and Sewerage Co was established in 1891, and laid a sewer pipe down the middle of what is now Central Ave, which emptied out into the Salt River. Fifty-six blocks were connected to the new sewer over the next year, but there was no rule that said anyone had to do so, and we’re not sure when exactly Rosson House was connected to the water and sewer systems. The city took over the water system in 1907, and the sewer system in 1911. They required households to connect to the sewer system by 1915, forbidding them from digging new outhouses.

Flush toilets, with their consistent flow of wastewater, were a big part of why new sewer systems needed to be constructed at this time. The first “modern” flush toilet is said to have been built in 1596 by Sir John Harington, with the water held in cistern upstairs, and requiring 7.5 gallons to do the job (as opposed to the 1.6 gallons low-flow toilets use today). A patent was granted in 1775 to English inventor, Alexander Cumming, for his version of the flush toilet, which included an S-bend that prevented sewer gas from coming up through the pipes. Many patents have been awarded since then, improving on his design. US inventor, Lewis Latimer’s first patent was based on his design for, “water-closets for railroad-cars,” in 1874. (Read more about Mr. Latimer and his legacy from our February 2021 blog, It’s Electric) Flush toilets were for those who could afford them, though, and dirt closets, chamber pots, and privies were used well into the 20th century. 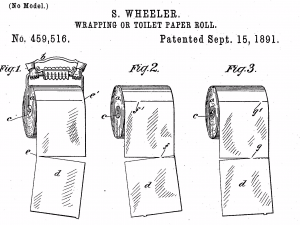 The change in how people, uh, went, also changed how they cleaned up afterwards. Throughout history, people would use natural materials like leaves, moss, husks, grass, bamboo, sponges, hay, corncobs, sticks, wood shavings, shells, rocks, sand, water and snow to clean themselves. They also used handmade items like pieces of pottery, and paper – namely old book, newspaper, magazine, and catalog pages. However, as the saying goes, you can’t flush rocks (or Legos, according to many parents). Joseph Gayetty of New York is given credit for the first manufacture and sale of paper made solely for cleaning keisters (in the western hemisphere, at least – the Chinese had been manufacturing toilet paper for hundreds of years by the time Gayetty got around to it in 1857). He was so proud of his invention he even printed his name on every page! It came in a box of 500 sheets for 50 cents (which would equal about $15 today) and was medicated for use on hemorrhoids. But what really got toilet paper rolling (ahem) was when it was manufactured and sold on a roll, with perforations that allowed the user to easily select a certain amount of paper to use. It also got another point in its favor when, in 1930, it was finally “splinter free.” (ouch!!) Today, toilet paper manufacturer Georgia Pacific LLC estimates that the average American household uses approximately 409 regular rolls of toilet paper a year, and as we’ve found out during the pandemic, they are willing to hoard it if they decide it’s necessary!

Research for this article was very interesting, and pretty gross. Information was found from a previous article we wrote in 2014 about The Sewer System in Early Phoenix; Homer Thiel, “Sanitation in Turn-of-the-Century Phoenix” in Phoenix’s Hidden History, 1998; History of US Water and Wastewater Systems, the National Academies Press; The History of Sanitary Sewers; The Historical Development of Sewers Worldwide; Smithsonian Magazine; SRP; National Geographic; History Channel; the Tombstone Chamber; the City of Prescott; and the City of Phoenix.