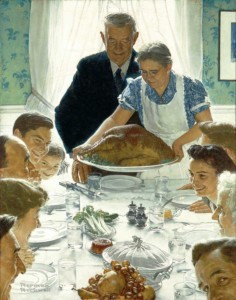 Thanksgiving conjures up two fairly iconic scenes – the first, of the Wampanoag peoples and English immigrants gathering together for a meal in the 1600s (separate fact from fiction about this story here); and the second, of the more modern Norman Rockwell print, Freedom From Want (1943), from the Saturday Evening Post (pictured here from the Norman Rockwell Museum). The first represents people of two disparate cultures putting aside their differences to come together – something many of us can relate to with our own families at holiday time; and the second represents a large family enjoying a plentiful meal – something that would have been very rare at the time it was published,  following the Depression and during the war.

Victorians built on the food traditions of the mythological “First Thanksgiving”, and, like many things they did, they super sized it. Ostentation was a hallmark of the Victorian Era, and food played a large part of that display. Lavish, multi-course dinners were the trend, as were multiple meals throughout the day (think of luncheons, teas, etc). Those who could afford to do so would forego the traditional meal at home and instead have a sumptuous meal at a restaurant or hotel. In 1875, the Honorable John Smith, Mrs. Smith, and Judge Alsap hosted a dinner at the Phoenix Hotel, with a, “huge turkey served thanksgiving style”. Well into the 1920s, restaurants would publish their Thanksgiving menu in the paper (like this one from Phoenix’s Ford Hotel, Thanksgiving 1896),

to entice people away from their homes and kitchens for the holiday. Smaller cafés advertised simpler fare, but high-end restaurants served 12-13 course meals that lasted hours. Our advice – hit the restroom before sitting down to that dinner! 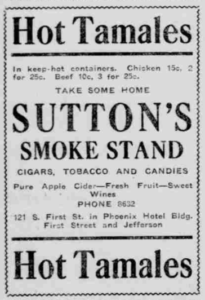 A uniquely Southwestern addition to the Thanksgiving Shoppers Guide from the November 22, 1915 AZ Republican.

Territorial Arizonans were very social on Thanksgiving, hosting picnics, costume balls, town socials, barbecues and banquets. Many people, however, either by design or because of budget constraints, ate their Thanksgiving meal at home. Periodicals and etiquette books of the day had suggestions for both elegant and modest repasts. For a more elaborate Thanksgiving meal, the 1899 Ladies Home Journal suggested oysters on the half shell, consommé, bread sticks, boiled shoulder, head of cod with hollandaise sauce, boiled potatoes, sweetbreads, roasted turkey with chestnut stuffing, sweet potato croquettes, boiled onions with cream sauce, cranberry jelly, mint punch, game (quail, venison, pheasant, etc), lettuce with French dressing, iced rice pudding, compote of oranges, wafers, cheese, and coffee. If your middle class income couldn’t stretch that far, they assured you that an entrée was not necessary, and suggested a clear soup, potato croquettes, boiled onions, roast turkey, baked custard, pumpkin custard, and a mock charlotte (also recommending never to serve pie on any occasion). Ideas for decorating the table with seasonal flowers, leaves, and fruits and vegetables were also included. Impromptu plays using “pumpkin lanterns” as both decoration and lighting for the stage, and games in the parlor were encouraged. After all, who wouldn’t want to spend an evening after a fine feast playing Headless Turkey? (It’s a Thanksgiving-themed version of Pin-the-Tail-on-the-Donkey.) 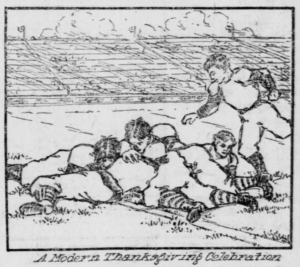 You didn’t think we’d forget football on Thanksgiving, did you? The first “pro” football games played on Thanksgiving were on November 25, 1920, between teams from Ohio, Illinois, Indiana, Michigan, and New York. Prior to the professionals taking over the day, though, Thanksgiving was well known as a day for high school and college football (as in this 1908 sketch depicting a “modern” Thanksgiving – some things never change!). In Arizona, our famous “Duel in the Desert” first took place between Arizona Territorial Normal School (now ASU) and U of A on Thanksgiving in 1899, before Arizona became a state (hence the winner receiving the Territorial Cup!). The other big football game in town on Thanksgiving afternoon took place each year at Phoenix Park between Phoenix Indian School and several other schools (depending on the year), including Prescott, Phoenix High School, and the Normal School. The famous Indian School Marching Band would be on hand as well to add to the festive atmosphere. If you didn’t like watching football, however, there were many other outdoor activities on Thanksgiving for turn-of-the-century Phoenicians, including parades and carnivals, baseball games, and car, bicycle, and relay races.

Whether you decide to take a break and dine in a restaurant like the Victorians, invite newcomers to join your repast like the Wampanoags, or enjoy a feast with your family like Norman Rockwell depicted, we hope each and every one of you has a happy, healthy, and plentiful Thanksgiving.

Information for this article was found in The Boston Cooking School Magazine of Culinary Science and Domestic Economics (November 1913); How to Amuse Yourself and Others: The American Girl’s Handy Book, by Lina Beard and Adelia Belle Beard (1887), Fading Silver: The Territorial Cup, the Arizona Foot Ball League and the Mystery of the History (Journal of Western Archives, 2014) by Robert P. Spindler; the Arizona Republican (November 26,1896), the Arizona Republican (November 30, 1899) the Arizona Weekly Miner (December 17, 1875), the Pro Football Hall of Fame, and Smithsonian Magazine. The Ford Hotel photograph from the top of the page is from the California Historical Society Collection at the University of Southern California Library.