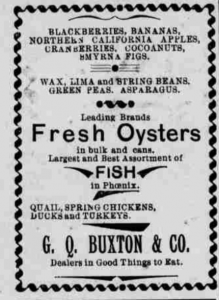 The Rossons may have lived in Phoenix over a century ago, but they didn’t exactly have to rough it out here in the “wild west.”  Any visitor to the Museum knows the residents of this lovely home enjoyed the modern conveniences of electricity, a telephone, and (thank heavens) indoor plumbing that included hot and cold running water and a toilet   (which you can learn more about from this blog article).  They also had their pick of grocery stores, markets, mercantiles, wholesalers, and other places to purchase their food.  For more information on that subject, here is a copy of a speech (edited for clarity) given by Eugene Parker of the Associated Grocers, to attendees of the Phoenix History Conference on October 15, 1977.