Like other Victorian Era home décor, home flooring was ornate, showy, and detailed. The Industrial Revolution (1760-1840) had mechanized industries enough so that materials were easier to process and items were cheaper to buy. Add that to the combination of railroads crisscrossing the country and the advent of mail order catalogs that sold everything from top hats to tiles, and Victorians were set to get just about any kind of flooring they wanted. Books about how to decorate your house were common, including tips on best floor décor to use in which rooms. Even Charles Eastlake, who’s name is used to describe the spindle style of 19th century furniture and architecture, published a book called Hints on Household Taste in Furniture, Upholstery, and Other Details (originally published in 1868, with six editions produced in the US by 1881). Most focused on tile mosaic flooring (or pavement), fitted carpets and area rugs, and hardwood parquet flooring. 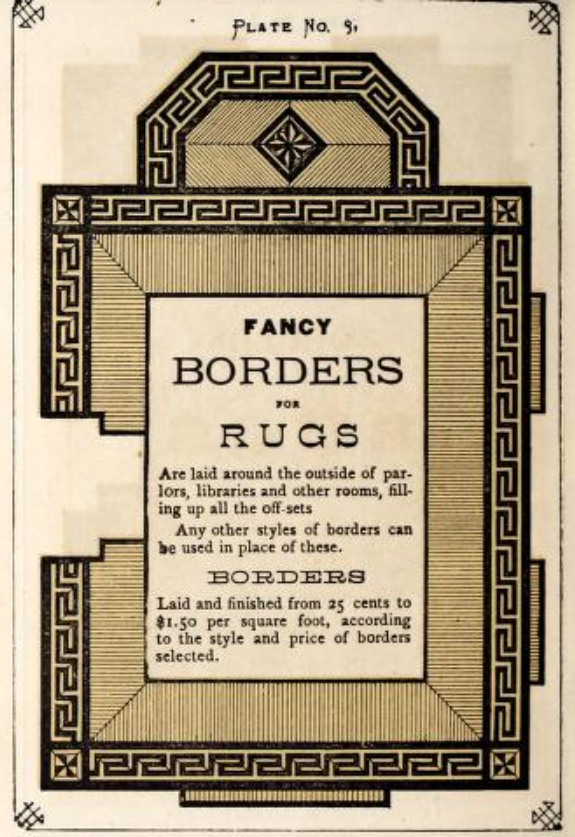 Ceramic tile floors have been around for thousands of years, originating in Asia around 4,000 BCE, and tile use spread through Western Europe during the Roman Empire. In the Victorian Era, tile was used in rooms associated with heavy traffic and/or water, like entryways, bathrooms, kitchens, and businesses. More affordable, mass-produced single color tiles and more expensive, handmade encaustic tiles were laid out in geometric patterns, creating a fashionable, elaborate design that was also hard wearing and could also be easily cleaned. Minton, Hollins, & Co. of Stoke-Upon-Trent, England, were responsible for the 19th century resurgence of tile use, and produced encaustic tiles installed in both Westminster Palace and the US Capitol in the 1850s, as well as everyday places like homes, schools and businesses. (see Minton tile patterns picture at the top of the page)

If Victorians wanted less expensive flooring that was still waterproof, they could use floorcloths or oilcloths – a piece of heavy canvas, painted (either with one color or in a more decorative pattern) and oiled or waxed to provide a waterproof barrier when placed over a carpet or wood floor. And though we generally think of linoleum as a 20th century material popular in 1950s kitchens, it was invented in 1855 by Frederick Walton, and was popular during the late 19th and early 20th centuries. Made of linseed oil, cork dust, resin, and pigments on a fabric backing, it was cheaper to purchase and install, and its smooth, uniform surface was easier to clean. It could also be directly installed in a room, or used more like a floorcloth or oilcloth to catch spills under a table or muddy footprints in a heavy traffic area.

We also think of carpet as a 20th century invention, but the oldest known carpet, known as the Pazyryk Carpet from Siberia, Russia, is about 2,500 years old. Fitted, wall-to-wall carpets existed during and before the Victorian Era, and were used for both decoration and warmth. The Sears & Roebuck catalog (c1902) sold carpet for as little as $0.48 a yard, which made it less expensive to have wall-to-wall carpet tacked down over the floorboards in your home than it was to have a hardwood floor (though it was more expensive than a pine floor). Carpet came in lengths of 1-3 feet by one yard, which were attached together to make a custom fit. Buyers could also get a decorative border to go with their carpet, much like that of parquet wood flooring, to make it more ornate. Some people would have cheaper flooring material with a more expensive tile mosaic or parquet wood border, intending to use a decorative carpet to cover the floor up to the border. 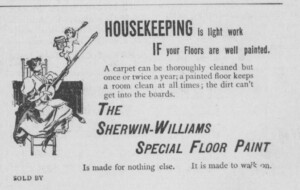 Aside from dirt floors, which were a stark reality in the homes of the poor and the enslaved, in America wood floors were some of the least expensive and simplest to acquire. In the 17th and 18th century, wood for floors was sourced locally – many times directly from the land they were building on – cut into wide planks, nailed directly to floor joists, and then hand-planed to create an even surface. Victorian wood floors were smaller widths, and had tongue and groove cuts (invented in 1885) so that the pieces could interlock with each other instead of each piece having to be nailed to the subflooring or joists. Wood parquetry flooring, made of inlaid pieces of various woods arranged in a decorative, geometric pattern, were very popular during the Victorian Era, though they existed for hundreds of years prior. Companies also sold what was called a “wood carpet,” which were generally lengths of quarter-sawn oak attached together on a fabric backing that could be easily glued to the subfloor. Floor paints were also sometimes used to create colorful designs on plain wood floors. The same Sears catalog mentioned above carried six colors of “Ready Mixed Floor Paints” for $0.28 a quart to $0.98 a gallon. Polyurethane wasn’t invented until the 1930s, so Victorians sealed their wood floors with a layer of wax or linseed oil (which would periodically have to be scrubbed off and reapplied), and were told to gently “clean” them with skim milk! 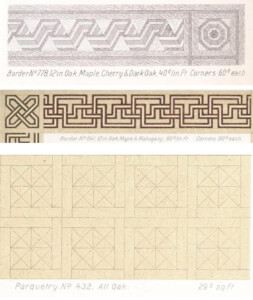 In Rosson House, all of the floors are wood (not including the tile hearths of the five fireplaces), and are original to when it was built in 1895. There are expensive hardwood parquet floors in the rooms on the first floor, and cheaper pine on the second floor. We believe they ordered their first floor flooring (say that three times fast!) through a catalog from the Johnson Wax company of Racine, WI – the same company you buy many of your cleaning products from today. Their 1901 catalog has many of the same patterns found in Rosson House, with those prices ranging from $1.60-$2.00 a linear yard for the plain oak flooring, $0.29-$0.50 a square foot for the oak parquetry flooring, $0.12-$0.90 a linear foot for the borders, and $0.60-$1.35 each for the parquetry corners. They likely sourced their upstairs flooring from a local lumberyard – there were four listed in the 1895 Phoenix City Directory. In Arizona newspapers around that time, pine flooring was listed as costing $21-$46.50 per 1000 ft, depending on where it was sourced (Oregon pine was more expensive than Arizona pine). Looking at the square footage of the home – each floor is approximately 1,400 sqft – we think it’s likely the Rossons spent around $500 or more for flooring on their first floor, $29-$65 for flooring on their second floor, and approximately $29 or less for their attic floor. We also know they had carpet runners on their front and back stairways because of wear to the stair treads, and because of tacks found in those areas during restoration. Several of the tacks also had red threads on them, so indicates the runners were red, though we don’t know in what pattern. Later, linoleum and vinyl flooring was installed over the floors, protecting them from additional wear and tear when the home became a boarding house, though some individual pieces had to be repaired and replaced during restoration.