Summer is upon us, and with it, higher temperatures. Ugh! When the mercury rises, Phoenix breaks out the shorts, tanks tops, swim suits, flip flops and sandals, and anything else that can let our skin breathe and cool off a little in this heat. After all, the temperatures get bad enough without having to endure long sleeves and long pants any more than truly necessary. We’re 100% on the side of cool, modern clothing at Heritage Square (along with air conditioning in the Museum and all Square buildings!), but there’s always that question that hits us and many of our visitors at this time of year – with constrictive clothing and no air conditioning, how on earth did people in early Phoenix survive?! 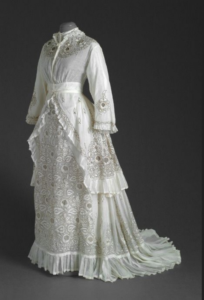 There are a couple of answers to that. One answer is that they didn’t. Heat related deaths like sunstroke and heat exhaustion were one of the leading ways people could die of accidental causes at the turn-of-the-century (link). The other answer is that they were simply used to it. Not only did they not have the choice to be able to relax in an air-conditioned space like we do, it just simply didn’t exist until Will Carrier invented it in 1902. So they dealt with is as a matter of course, and dressed for the heat to the best of their ability to do so, given societal constraints.

Turn-of-the-century clothing was beautiful. Victorians and Edwardians used fabrics, styles, and detailing that can make modern clothes pale in comparison. But it was restrictive. Society dictated what proper attire was, and being proper at that time included covering the vast majority of your body, no matter what the season – that included long sleeves, long skirts and pants, high collars, sturdy footwear, hats and gloves. And that was only the outer layer! Counting up each piece of underclothing, men and women could wear seven or more total layers of clothing each day. That sounds unbearable, but they made some common sense choices when it came to those pieces of clothing.

Summer clothing was made of lighter fabrics, in both weight and color. You don’t wear your flannel jammies and heavy coat during this time of year, and neither did early Phoenicians. Winter fabrics like heavy wool weaves, velvet, flannels, and tweeds went into storage, and out came “feather” and “tropical” weight fabrics like linen, muslin, organdie, and thinner wool weaves. Summer hats were made of straw and reeds, which allowed for more airflow, and the fabrics were also made of natural fibers (unlike our modern cotton/polyester blends), and so they allowed skin to breathe more.  As you can see from these ads, even underwear and corsets were made of lighter materials to help cope with the heat. Hand fans and parasols also helped. (We have heard that when sweat permeated their cotton underclothes it helped keep Victorians cooler through evaporation, but haven’t experienced that ourselves. You couldn’t give us enough money to wear all those layers of clothing – including a corset – during the summer in Phoenix!) 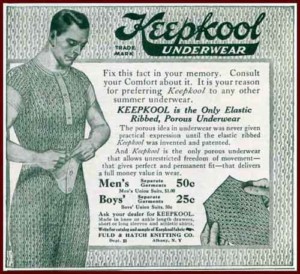 There was some adapting of the rules during the summer in Arizona when it came to clothing, if people could get away with it. In her book, Vanishing Arizona: Recollections of My Army Life (1908), Martha Summerhayes, an officer’s wife who traveled through the Arizona territory with him and his regiment in the 1870s, lamented her clothing restrictions in the southwestern heat. She said was envious of the Mexican women who, “always wore, when in their casa, a low-necked and short-sleeved camisa…a calico skirt (and) always white stockings and black slippers”. She regretted not adopting their cooler fashions, suffering instead in long sleeves and high necks, due to the, “prejudices of (her) conservative partner.” Ouch!

Some were a little more lenient with those traditional rules, as was reported in the July 12, 1904 Arizona Republican, when a pastor encouraged his congregation to, “come to church dressed comfortably, even if (they had) to come hatless and coatless,” in the summer heat. Others reacted similarly to Lt. Summerhayes. The Arizona Republican newspaper reported in April 1920 that the priest at St. Mary’s in Phoenix refused entry to women in “scandalous, immodest dress.” He forbade dresses with “diaphanous sleeves” and “low-cut necks,” until the ladies of his congregation managed to talk him into changing the rules to at least allow for the sleeves. The article humorously went on to mention that the word on fashion from back east was calling for hemlines to rise to just below the knee, showing several inches of silk-clad legs in the process (heavens!), and they wondered what further rules the priest would have to invoke when that happened. 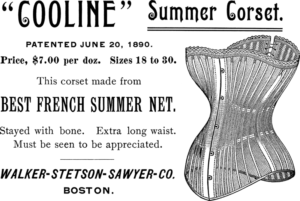 So, there you have it. Would layers of lighter, breathable clothing (and possibly evaporating sweat) be enough to talk you into dressing to the nines in the heat of the summer, turn-of-the-century-style, even with today’s air conditioning? You already know our answer!

Find out more about what all that sweat, lack of regular bathing, and no deodorant would do in our previous blog, History Stinks (February 2017), and learn how early Phoenicians used pools, canals and sleeping porches to beat the heat in How Phoenix Stayed Cool (August 2018). 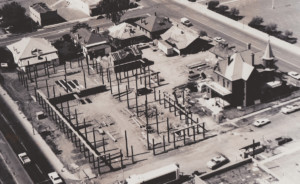 Thank you to everyone who purchased memberships, followed our social media accounts, participated in our History at Home distance learning activities, and donated to our foundation during Historic Preservation Month.  It’s because of you and our wonderful community that these buildings are still here, and that we are able to continue to do the work we do to protect and preserve Phoenix history.