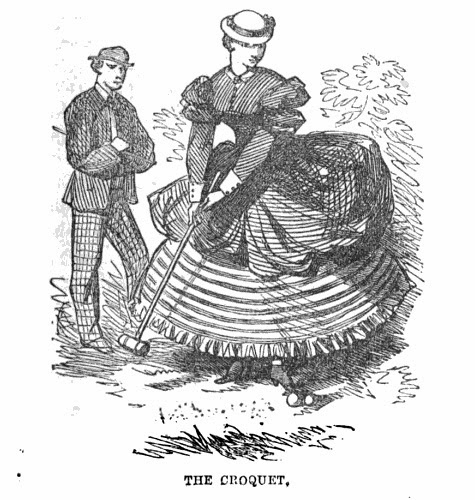 Croquet, more commonly known as, “that game I used to play with my family when I was a kid until we all went rogue and started chasing each other around with mallets,” was invented in Ireland (called “crooky”) and then brought to England in the mid 1800s. The Victorian leisure class loved croquet, creating wide stretches of lawn on which to play, in parks and at private homes during garden parties. Croquet sets were readily available and inexpensive. An unusual example of the game, complete with hedgehogs and flamingos, made it into Lewis Carol’s Alice’s Adventures in Wonderland (1864). Etiquette books of the day gave advice on how to have a successful garden party with croquet.  They directed women to dress in “jaunty costumes suited to the exercise”, and fashion designers created dresses specifically for playing croquet with brighter fabrics and bolder patterns, and even higher hemlines. Shoes, stockings and petticoats were part of the design, as ladies could flash a well-clad (and scandalous!) ankle on occasion while playing the ball. 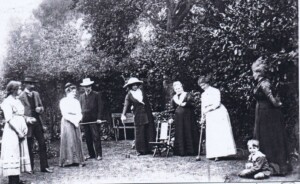 gender in an informal setting. Some places, however, kept the genders segregated during the game, including the croquet lawns at Central Park in New York City, until 1878. The game traveled West, despite lack of grass lawn availability. It was definitely popular in Phoenix’s earlier years – we find a couple of familiar names mentioned in the Phoenix Herald in connection with the newly formed Golden Leaf Croquet Social Club (June 28, 1879) – Miss Flora Murray and Dr. Roland Rosson! Even in the hotter months the Arizona Republican (August 1891 and June 1894) touted “croquet in the moonlight” on the front page of the paper. If it was too hot outside, though, you could play croquet in your parlor with a table top game (like the one pictured at the bottom of the page). 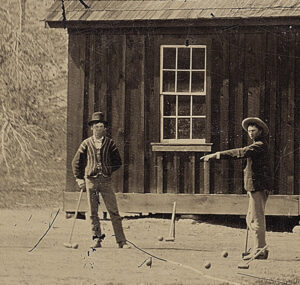 Croquet was sought-after until around World War I, and regained popularity again after the Second World War as a family backyard game.  In the 1970s and 1980s, interest in the game as a competitive sport took hold, with creation of the United States Croquet Association (1977), the Croquet Foundation of America (1979), and the American Croquet Association (founded in Phoenix in 1987, twelve years after the Arizona Croquet Club, in 1975).

Learn more about croquet at the websites linked above, and also from the Born in 1808 and Edwardian Promenade blogs. Learn about Victorian Era toys from our January 2021 blog. 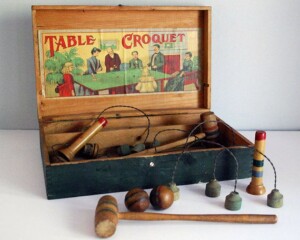