(Before we start, we would like to thank everyone who has supported us during this time, and who continue to do so with their purchases, donations, and memberships. Your care for this valuable and vulnerable piece of local history means the world to us. Thank you!)

Believe it or not, we historians are not always right. We admit it! History is as complex as the lives of the people who live it, and since people don’t write down every thought they have or action they take, we have to make an educated guess about what actually happened and why. We look at primary and secondary sources whenever possible – through letters and journals if we’re lucky, and through newspaper and document archives – to learn more about the people and times we’re studying. 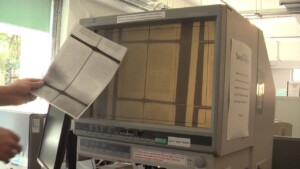 Oh, the horror of microfiche. Better take Dramamine before plunging in to your research!

Raise your hand if you remember having to go through dusty documents themselves, or copies on microfiche at your local library! We do (ugh), and consider ourselves extremely lucky to have online resources like the Digital Arizona Library, the Maricopa County Recorders Office, the Library of Congress, Newspapers.com, and Ancestry to help us delve into historical archives. Previously, if we wanted to see the original deed that transferred ownership of the Rosson House from the Rossons to the Goldbergs, we’d have to go get in our cars to go to the County Recorders Office in person, fighting Phoenix traffic on the way (that in and of itself reason enough to dread the trip!). Now, it can be done with a simple online search that takes a minute or two, from the comfort of our couch during quarantine. It is unquestionably fantastic.

Ease of access and using primary sources doesn’t always mean reported histories are 100% accurate, though. Mistakes can happen when trying to decipher old handwriting, exact dates can be misremembered or jumbled, and rumors and myths can be given the weight of truth without real evidence to back them up. Perspective can be powerful, and biases for or against something, whether from historians themselves or from whoever recorded the history to begin with, do happen. 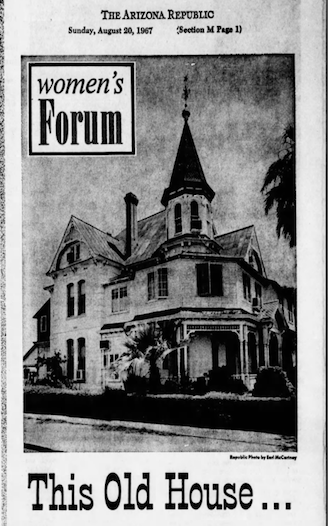 While researching Rosson House in the more recent Arizona Republic archives (from Newspapers.com), we’ve come across an interesting statement about Flora Murray Rosson (pictured at the top of the page) from an article in the August 20, 1967 newspaper. The article, which calls the house the Whitelaw Reid Home after its most famous snowbird resident, says this about Flora:

“Mrs. Rosson dreamed of living with panache in Arizona Territory. She wanted a home like “back East,” with room to entertain. (The Rossons) moved to Los Angeles in 1896, (where Dr. Rosson) died a year later, with rumor whispering he was a suicide, despondent over his wife’s burning ambitions and lavish spending.”

Interesting! No punches pulled here! However, for starters, the article gets a couple of dates about the Rossons wrong, including the year the House was built (the article says 1892, but we know work started in 1894 and finished in 1895), and the year the Rossons moved to California, which actually happened in 1897. But what about what the article says about Flora? We hadn’t heard about this, but could what it says about her be true? We looked for more evidence and found it…Kind of.

This story about Flora being a social climber was repeated in the National Registry of Historic Places Nomination Form in 1971 (referencing the 1967 article). Also, a document from the Murray-Rosson family history deep in our files (provided by members of that family), says that the family, “Never believed (Dr. Rosson) committed suicide after three weeks illness over his ‘wife’s burning social ambitions and lavish spending’.” Though it’s not dated, could this be where the story from the 1967 article came from? Or is this a reaction to the 1967 article? Since we don’t have journals or letters from the Rossons, or any other first-hand accounts, we have to rely on evidence from newspapers and general knowledge about the time period. 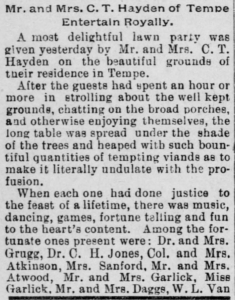 An 1894 newspaper article about a social gathering in Tempe.

When Roland and Flora lived in Phoenix during the late 1800s, social gatherings were regularly mentioned in newspapers. Information about parties included who gave them, who attended them, decorations, games or other activities, and even occasionally what women wore. Common sense tells us that anyone with, “burning social ambitions,” would have been mentioned often, as both host and attendee. Big purchases, like pianos, automobiles (after 1900), houses, or lavish and lengthy vacations, were also mentioned in the newspaper.

So, was Flora Rosson in the newspaper all of the time as part of the social set, wearing expensive new gowns? Did she purchase a fancy piano and top of the line furnishings to go in their new house? Did she vacation on the Riviera, or even just on the beach in California? Here are Heritage Square Museum Interpreter, Katie Delahoyde, and Director of Education, Jennifer Hance, to give us the inside scoop:

No lavish spending that we could find, not many parties, marrying “down”, waiting for years to build a fancier, European-style home, and not one mention of her going crazy with the insurance money (or any mention of her at all) after her husband’s death. What do you think about Flora? Can this rumor about her being a social climber and spendthrift be confirmed, or is it busted?

Find out more about Dr. Rosson’s story — including his dishonorable discharge and the mystery surrounding his death — in our blog from September 2017.

How to Help Heritage Square during the COVID-19 Crisis

Without being open to the public, Heritage Square is struggling to have enough income to keep our employees on our payroll. The Paycheck Protection Program loan we received runs out at the end of June. We’re also applying for grants to help us get through this time, and are also looking for other avenues of support. Here’s what can you do to help: