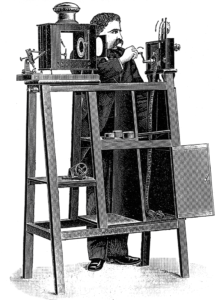 The first known motion picture was made before Rosson House was built! Recorded in 1888 by Louis Le Prince, Roundhay Garden Scene is about 12 seconds of just what it sounds like – people walking around a garden. Though that seems very basic and kind of boring to us now, at that time it was an incredible scientific breakthrough. Up until that point, “movement picture” devices – like the thaumatrope (c1825) and the zoetrope (c1833), along with dozens of others – had only been able to give the illusion of movement. Many of these inventions, including William Dickson and Thomas Edison’s kinetoscope (which used the new roll film developed by George Eastman), were marketed as toys or novelties that could be enjoyed individually, but not by several people at once like movies today are.

Inspired by the kinetoscope, Auguste and Louis Lumière created the cinématographe – the world’s first motion picture camera and projector that could show films to multiple people at once. They unveiled their invention to the public on December 28, 1895 at the Grand Café in Paris, with a film they recorded of workers leaving their factory. Like Roundhay Garden Scene, this and many other early films were short, less than a minute long – and depicted common, everyday scenes. What sparked people’s interest in these films, at least to begin with, was the uniqueness of their very existence.

More movie cameras and projectors were invented (like Thomas Armet’s vitaphone – shown at top – which would eventually be bought out by Thomas Edison), and the popularity of these novelty films grew. Traveling entrepreneurs toured the country with a projector and reels of film, to set up shop in big and small towns alike for a couple of days, showing their movies in theaters, opera houses, or even tents, charging up to 75 cents for admission to see the series of short films they brought with them. The movies would be shown in between live vaudeville acts and music performances, and featured travel in far off places along with sensational events like President McKinley’s assassination and funeral, boxing prize fights, Spanish bull fighting (marketing for these included mentioning multiple deaths of animals and people!), the San Francisco earthquake and subsequent fire, and recreations of the Spanish-American War. Movie makers also began creating fictional films as well, with amazing adventures like A Trip to the Moon by George Méliès (c1902) and The Great Train Robbery by Edwin S. Porter (c1903). 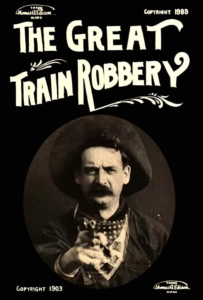 Towns soon saw the advantage of having their own “electric” (movie) theaters. The first permanent building in the US dedicated solely to showing motion pictures, Tally’s Electric Theatre, opened to the public in Los Angeles on April 16, 1902. It could seat 250 people, and charged 10 cents for admission. The first Nickelodeon (named using the cost of admission plus the ancient Greek word for theater – “odeon”) opened in Pittsburgh, PA on June 19, 1905. Set up in a storefront with a cinématographe projector, a framed screen, a piano, and about a hundred chairs, they could show movies all day long and it cost just a nickel’s admission. These kinds of theaters would prove to be wildly popular, and in just two years over 8,000 Nickelodeons would pop up all over the country. The silent shows with their “mood” music played in the background were broadly appealing because of their affordability, and also because of their lack of a language barrier – 1.3 million immigrants came to the US in 1907 (a record number at that time, and a number that wasn’t reached again until the 1990s). 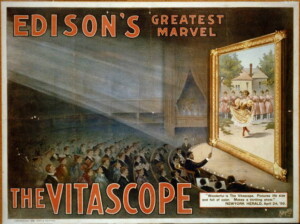 But even smaller towns were arranging to have their own permanent theaters – the residents of Globe were building a “moving picture house” in February 1907 (with planned admission at either 10 or 15 cents), and those of Douglas prepared to open one in their old post office building the following year. Phoenix even opened an open-air movie theater 1908 in the lot next to the alley on 1st Street, between Washington and Adams. It was close to the owners’ indoor theater, which they said would be used “on cool nights and during the daytime.”

World War I and the Great Depression would only serve to increase the popularity of motion pictures, as people came together to support the war effort for the first, and as an escape from reality for both. Just one thing would come close to harming the fast-growing movie industry in those years – the 1918 influenza outbreak. As the disease swept through the country, cities and towns closed schools, churches, and movie theaters because of the threat of spreading the virus (sound familiar??). On October 9, 1918, the National Association of Motion Picture Industries announced an embargo on releasing new motion pictures by October 15th, due to the influenza epidemic. Over half of production was halted, and theaters remained closed in Phoenix for about nine weeks (October through early December). They reopened in time for the holidays, and then closed again in early January as cases spiked. Most theaters and production companies that hadn’t closed permanently reopened by spring 1919. The Hollywood studio system would emerge from the rubble, as big studios would buy out their competitors, purchase and control movie theaters (a practice prohibited by the Supreme Court in 1948 due to anti-trust laws), centralizing power, money, and influence.

This blog article by no means covers all of cinematic history. Learn more here: 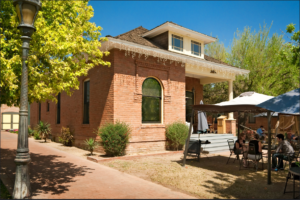 A unique business opportunity is now available at Heritage Square! The Bouvier-Teeter and Silva Houses, both listed on the National Register of Historic Places, are now commercial properties you can customize for your retail space or restaurant. Located in downtown Phoenix just steps from several museums, sports venues, and the convention center, they are the perfect place for you to set up shop! Learn more about these historic houses, and how you can apply to rent either space for your business on our website.