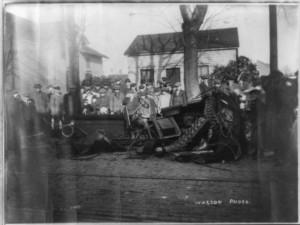 The very first car accident was supposedly in 1869 (that’s over 150 years ago!), when an Irish scientist named Mary Ward took a ride in a steam-powered vehicle built by her cousin. As they were driving, the car turned and she fell out. The vehicle’s heavy iron wheels ran over Mary, breaking her neck and killing her. (The Atlantic) The seat belt that would have saved her life was patented in the US in the late 1800s, and became a requirement in vehicle design here in 1968.

Ohio City, Ohio lays claim to the first automobile accident in the United States. (Ohio History Central) In 1891, inventor James William Lambert’s car (the very first single-cylinder gasoline-powered vehicle) hit a tree root and went out of control, crashing into a hitching post. Luckily, in this situation there were no fatalities! With coil springs invented in the mid 1890s, and shock absorbers that became standard equipment on the Model A Ford in 1927, Lambert might have avoided the accident altogether. 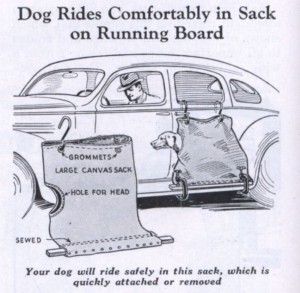 In the 20s and 30s, efforts were made to try and save pedestrian victims of car accidents. Designs were modeled after cowcatchers on train engines, and kept the pedestrian from being run over and killed after the car hit them. They relied on slow moving city traffic, and an alert driver that would pull a lever to drop a roller, scoop, or shovel that would prevent the unlucky person from getting caught underneath the automobile. (Atlas Obscura) And if that’s not a strange enough safety feature for you, here’s a sack for your dog to ride “safely” on the running board of your car, c1936. (Vintage News Daily)

Manufacturers tried to make automobiles safer as the number of cars on the road continued to grow. Inventions like safety glass, windshield wipers, and turn signals were major advances. But numbers of automotive deaths grew just as steadily. By 1922, more Americans had been killed in automobile accidents than American soldiers had been killed in battle in World War I (Collectors Weekly). By 1925, car accidents were reported to account for over sixty percent of death tolls at the time in cities with populations of over 25,000 people (Phoenix reached a population of over 29,000 in 1920, with 11,000 registered automobiles). 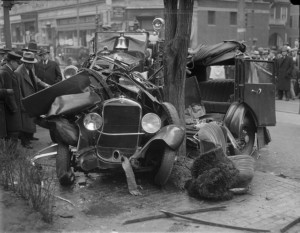 The photo at the top of the page is courtesy of the ASU Library Digital Repository.

See a timeline of the inventions that have made cars far less deadly than they could be on the Automobile Association’s website. Catch a couple of car catchers in action, from British Pathé films, circa 1927 and 1939. Learn more about speed limits at the turn of the century (and before!) on our February 2019 blog article, It’s the Limit.