"Our state fair is a great state fair - don't miss it, don't even be late!" 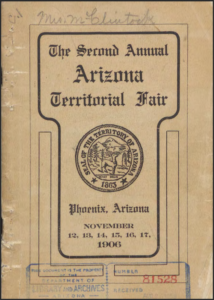 Rosson House has ties to the first Territorial Exposition here in Arizona, in 1884, when Dr. Rosson himself won second premium for his entry of a 1,800 lb. grade cow named Sis, who was noted in the newspaper for being “a fine milker.” (Side note: If you’re looking at Heritage Square and wondering how on earth the Rosson kept livestock here, just remember what the Square looked like in the 1885 C.J. Dyer map. Block 14 was on the edge of town, so the Rossons had the place to themselves, and whatever livestock they wanted to raise!)

Fairs and festivals have been around for a long time, as have the names we use for them. The word “fair” comes from the Latin feria (holiday, market fair), or feriae (religious festivals, holidays), and the word “festival” comes from the Latin festus (solemn, festive, joyous). They were associated with holy days during the Middle Ages, but were also tied to the time of year when certain crops were sown or harvested.

The first agricultural fair in the US was reportedly in 1807, when Elkanah Watson of Massachusetts showcased his sheep with sheep shearing demonstrations. He then encouraged his neighbors to display their own livestock in public, with the idea of giving awards to the best of the bunch. It’s a far cry from today’s daredevil rides and fried treats of the state fair, but it’s at the heart of the educational purpose of most county and state fairs. 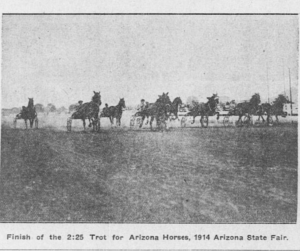 Arizona revamped its Territorial Fair in 1905, relocating it to its current location with the help of a group of business leaders who purchased the 87 acres of land, and built the horse track. The purpose of the fair was to to exhibit agricultural, horticultural, livestock and mining exhibits – not just livestock, crops, and examples of minerals and ore, but also the innovation and technology (like that of Copeland two decades before) that was driving growth in those areas. But the big draw for Fairs was starting to be entertainment.

The first Territorial Exposition had horse races, as you might expect, but it also had a bicycle race as well as a display of a steam-powered bicycle built by Phoenix resident and Town Hall clocksmith, Lucius D. Copeland (he also won the bike race that year, no surprise). In 1905 you could also see an automobile demonstration and novelty race at the Fair, shooting demonstrations, military demonstrations, a miners’ drilling contest, a band, and a hypnotist, but by 1919, you could see human canon balls, aerial stunts, dog shows, automobile races and shows, carnival rides, rodeo events, and so much more. 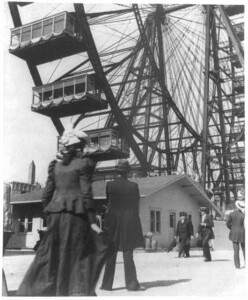 You could even watch as Governor Campbell and his wife took their first plane ride in separate two-seater planes, “not (appearing) to be worried or anxious in the least about the prospect of flying.” The original ferris wheel (picture to the left, courtesy of the Library of Congress) was invented in 1893 in Chicago, with an astounding diameter of 250 feet, and with 36 cars that could carry a total of 60 people each. Smaller versions of the wheel seem to have migrated to Arizona in the early 1900s, and of course still exist in fairs across the country today as one of the tamer rides available.

It hardly seems like fall here in Phoenix without our annual State Fair, or without all the great festivals we usually have at Heritage Square, like Phoenix Flea and Rainbows. It will come as no surprise to you by now that this isn’t the first time the Arizona State Fair has been closed due to a world-wide pandemic – in 1918 the decision was made at first in mid-October to postpone the Fair from its original dates November 11th-16th, and move it to the week of December 2nd-9th. But, by the end of October, influenza rates were much worse, and the State Fair was called off altogether. By 1919 the State Fair was back in action, and we hope that means it will be back in 2021, too. 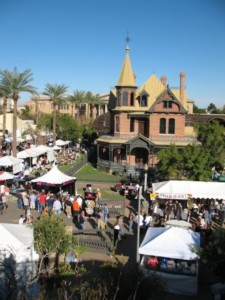 Information for this month’s article was found in issues of the Arizona Republican from the Library of Congress Chronicling America digital archive, The Saturday Evening Post, the Arcadia Publishing Blog, and AZ Central.