Victorians had many ways to deal with the heat of the summer – wearing lighter-weight clothing, public bathing (i.e. – swimming), iced drinks and treats, staying inside or at least in the shade, and encouraging airflow through their homes and businesses. For the latter, that might seem impossible to do in Phoenix in the summer, since it stayed so hot outside (and still does!), even at night. But, luckily for them, the invention of the electric fan would change that.

Handheld fans have existed for thousands of years, with the ancient Chinese, Egyptians, Greeks, Etruscans, and Romans showing evidence of fan use as far back as 3000 BCE. Used to cool and shade their owners, fans were also symbols of power, myth, and ceremony, as depicted in this ancient Egyptian art (on the right).  Folding fans were created in the Far East as early as the 10th century, and became very popular in Europe, but there the history of the fan stopped, for a long time. 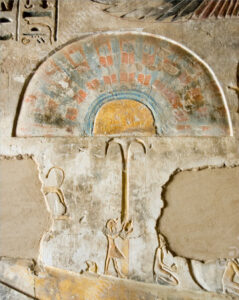 Until the late 1800s, the only way you could use a fan to cool yourself was by doing the work yourself (unless you were a member of royalty or other very wealthy class, when you could have a servant do the work for you). In 1882, however, a man named Schuyler Wheeler developed the first electric fan, and partnered to create the Crocker-Wheeler Electric Motor Co in 1889. With an open cage and bare electrical coils, their fan (drawing, below left) wasn’t the safest invention around, but other designs would soon at least cover the interior workings to prevent people from electrocuting themselves. (Finger safety would have to wait another 80 years or so.)

Electric fans were available in the Montgomery Ward and Sears Roebuck (see their fan, below right) catalogs of the mid 1890s. Battery, kerosene, and water powered fans (see the patent at the top of the page) were popular in areas like early Phoenix, who did not enjoy access to electricity until nighttime. An article in the 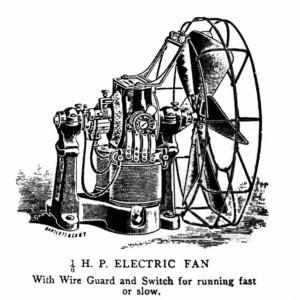 August 19, 1891 Arizona Republican remarked that a water powered fan might be preferable to an electric one, as, “the electric plant worked only at night in Phoenix…(and) on the other hand, water is at all times ready.” It quoted the cost of either fan as $20 (which included the cost of the electricity or water to run it). It went on to suggest that anyone with a water fan would use too much water, unless they could use the spent water to irrigate their garden. If that was too expensive for your household, you could go into local stores and restaurants to experience their fans. Ceiling fans (originally patented in 1889) were very popular commercially. Many businesses would advertise in the newspaper when they installed fans, hoping that would drive customers to come in, enjoy the cooler air, and of course make a purchase or two.

Fans were made more lightweight when manufacturers stopped using brass (due to shortages during World War I) to make fans and began using steel and aluminum instead. And, though many of us continue to have fans in our homes and businesses, refrigerated air (originally designed in 1902 by Willis Carrier), generally put paid to any further fan development. 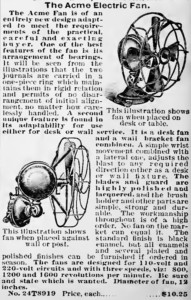 If you, like us, are a fan of fans, there are two amazing museums you can visit that are dedicated to them! In Zionsville, IN, you can discover more about the history of electric fans at the Antique Fan Museum, and in the UK, you can go back to the origin of handheld fans at The Fan Museum in Greenwich, London. They even serve afternoon tea! *swoon* 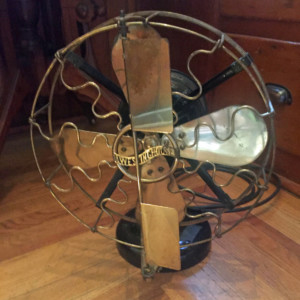