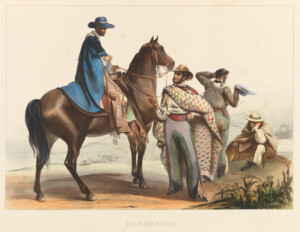 When we think of cowboys, we think of ranches, rodeos, lassos, buckaroos, corrals, broncos, lariats, chaps, and mustangs.

These words evoke a detailed picture of cowboys and the American West. Each of them are also derived from Spanish words and cattle herding traditions that came to what is now the United States from Mexico as early as the 1500s. That’s right – the original American cowboy was a vaquero that looked more like Anthony Quinn (who was usually cast as the ethnic “bad guy” in 20th century Westerns) than the stereotypical image of Gary Cooper or John Wayne. 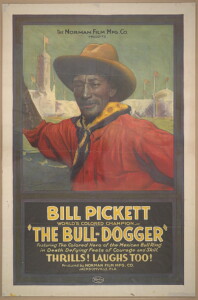 Latinos aren’t the only ones left out of the mythological picture of the American cowboy – Native Americans and African Americans worked cattle, too, sometimes as enslaved or forced labor, and sometimes as paid labor. Black cowhand Bose Ikard was with Charles Goodnight and Oliver Loving when they charted the Goodnight-Loving Cattle Trail in 1866. Goodnight said this about Ikard, “There was a dignity, a cleanliness, and a reliability about him that was wonderful…(He was) the most skilled and trustworthy man I had.” African American cowboy Bill Pickett was known in Oklahoma as, “the greatest sweat and dirt cowhand that ever lived – bar none.” But he is remembered in history as the inventor of bulldogging (also known as steer wrestling) – the only one of eight rodeo sports that is credited to an individual. Jackson Sundown (Waaya-Tonah-Toesits-Kahn) of the Nez Perce tribe was a long-time popular horseman at rodeos around the turn of the century, winning the World Title in the 1916 Pendleton Round-Up Saddle Bronc Championship at the age of 53. When he would ride the crowd would whistle, stomp and cheer, “Ride ’em, Sundown!” He has been inducted into the American Indian Athletic Hall of Fame, the National Multicultural Western Heritage Museum and Hall of Fame, the National Cowboy and Western Museum and Hall of Fame, the Pendleton Roundup Hall of Fame, and the Idaho Hall of Fame. He died in 1923 of pneumonia, one year before Congress “granted” US citizenship to Native Americans. 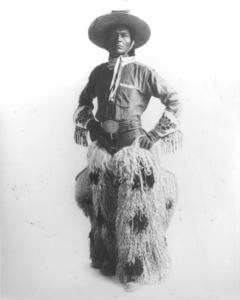 Latinos, Native Americans, and African Americans consisted of about a third of all cowboys during the “golden age” of the American cowboy (between 1866 and 1895). There is a plethora of information out there about their forgotten and overlooked stories – here is a partial list of those we found and used to research this article (please let us know if you know of any others and we’ll add them here!):

The top photograph is of African American cowboys in Texas, c1913 (Getty Images); the second is a picture of  Mexican rancheros (California State Library); the third is a 1923 Bill Pickett movie poster (Smithsonian); and the fourth is of Jackson Sundown at the Pendleton Roundup (Oregon Historical Society). The historical cowboy terminology comes from the Online Etymology Dictionary.