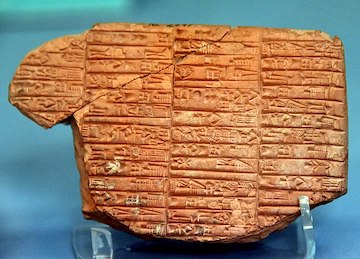 There is just something about being in a library surrounded by books – the smell, the sound of the pages turning, the seemingly infinite amount of knowledge and number of stories just waiting to be explored. But the first libraries and archives predated books, as people used clay tablets to record their histories and information. Clay tablets dating as far back as 1000 BCE and 3000 BCE have been discovered in ancient records rooms in the Babylonian town of Nippur (now Iraq), and at Tell el-Amarna in Egypt.

Libraries as we know them were at first privately owned, by individuals or organizations (generally governments or churches – like this picture of the Admont Abbey Library in Austria, founded in 1072 CE by Benedictine monks) who were wealthy enough to be able to both afford books and to know how to read them. During the American colonial period, books had to be shipped from Europe, which led to their high cost. The first “public” libraries were available only to people who purchased memberships or subscriptions. Benjamin Franklin helped start the first of these in the American colonies, called the Library Company – each member had to invest 40 shillings to start, and 10 shillings each year to maintain their subscription. His library still exists today as a research library with its original books and many more. 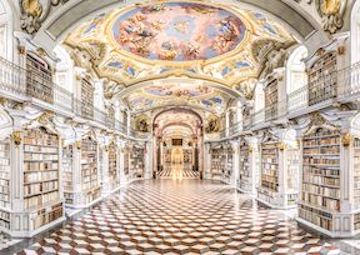 (Fast Fact: Benjamin Franklin also created the first mail-order catalogue in the colonies in 1744, and it’s no surprise that was for buying books! The catalogue was essentially a list of books available for purchase – almost 600 of them in fact, including books on history, divinity, law, mathematics, philosophy, physics, and poetry. Read more about the history of catalogues from our December 2021 blog article, Mail-Order Catalogues.)

Public libraries started to spread through the US in the mid 19th century, supported by tax dollars instead of personal subscriptions or memberships, though Arizona Territory had its share of subscription libraries before the public ones were established. Local newspapers had ads for lending libraries in Tucson, Prescott, and Yuma as early as the 1870s. An ad in the Arizona Citizen promoted a library with books in German, English, and Spanish (September 8, 1877)! Many of these subscription libraries were located in newsstands that sold newspapers and magazines, like J.S. Mansfeld’s Pioneer News Depot (Tucson), the Tinker & Leonard News Depot & Circulating Library (Prescott); and at Schneider, Grierson & Co (Yuma), but they were also located at drug stores (Florence), parsonages (Flagstaff), and high schools (Phoenix). Newspapers would also report on library use, and what new books libraries were getting into circulation (a great idea!). The Arizona Territorial Library was established in 1864 in Prescott, the then-territorial capital, to house official books, records, and documents. It moved when the capital moved – to Tucson in 1867, back to Prescott in 1877, and finally to Phoenix in 1889 – and became the State Library in 1912 when Arizona became the 48th state. The oldest continuously operated public library in Arizona is the Copper Queen Library in Bisbee, AZ, open since 1882. Though Phoenix became the territorial capital in 1889, it didn’t have a public library until 1898, and only then thanks to local women from the Friday Club. 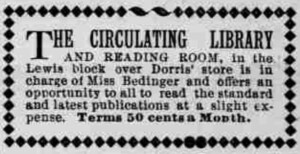 The Friday Club was established in 1897 by a group of 12 local women as a literary gathering. They researched historical events for later discussion at their meetings, and soon saw the need for Phoenix to have its own public library. To raise funds for the library, the Friday Club hosted teas, musical programs, lawn parties, and even a play. With this money, they were able to open a library with 1,000 books in two rooms at the Fleming building (built in 1883 at Washington and First Avenue, and torn down a century later), initially for their own use, but soon for the general public. The library moved into City Hall in 1899 and later its own building with grant money Phoenix received  from Andrew Carnegie – a Victorian Era multi-millionaire steel magnate who used his money to improve his reputation and legacy by helping build over 1,700 libraries nationwide. The Phoenix Carnegie Library (now known as the Carnegie Center) opened in 1908 with 7,000 books. It was the only public library in the City of Phoenix until 1914, and served as the main branch of the Phoenix Public Library until 1952.

Currently, Phoenix has 17 libraries, lending books, eBooks, and audiobooks, but also movies, music, WiFi hotspots, laptops, Culture Passes, and even seeds! And they’re not the only public library expanding their list of what they lend – locally, the Chandler library lets patrons use sewing machines, 3D printers, laser cutters, and professional studio equipment, and the Gilbert library lends out telescopes and prom dresses; the Albuquerque, NM library lends baking pans, and the Oakland, CA library lends out a whole collection of tools (home improvement, auto, and yard). Libraries all over have fun, educational programs for new readers, ESL learners, people who are learning computer literacy and coding, people who want to become US citizens, and more. They are truly priceless community resources!