In October of 1870 a small committee of people who had settled into an agricultural community and started businesses in the area north of the Salt River met to discuss purchasing a plot of land on which to build a permanent town. They raised $50 by popular subscription, and decided to spend it on a 320-acre scrap of land defined by the current-day boundaries of 7th Avenue to 7th Street, Van Buren Street, south to Harrison Street. This future home of Phoenix was relatively undisturbed – free of desert growth, visible Hohokam ruins, and not currently inhabited by earlier Native American and Spanish settlers. It was also considered high ground – far enough north of the river to avoid flooding.

The committee called itself the Salt River Town Association and hired William Hancock to survey and plat the new town. They called it Phoenix, named for the mythical bird that arose from the ashes of ruin, just as they saw new city arising from the ashes of the Hohokam civilization that abandoned the area approximately 400 years before. 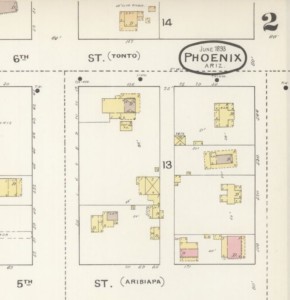 Sanborn Fire Insurance Map of Phoenix in 1893, showing part of Block 14, two years before the construction of the Rosson House.

Hancock drew inspiration from Philadelphia, and platted a 98-block city, centered around a civic plaza. The shape was an east/west, north/south grid, making navigation easy, and he named the streets after U.S. Presidents and Native American Tribes. Several drawings of the area existed prior to Hancock’s, but his is perhaps the first official map of the City of Phoenix. In the century since that initial drawing, Phoenix has sprawled from 1/2 square miles to 517 square miles; and from 235 residents to 1.6 million residents, (and even more in the metro area, with 4.66 million people calling the Valley home).

Heritage Square’s new exhibit, You Are Here: Mapping Early Phoenix, explores the development of early Phoenix, and specifically how those 98 blocks became the bustling downtown we enjoy today. The exhibit showcases not only the artistic, scientific, and geographic qualities of maps, but depicts the people and events that shaped how boundaries of all types were drawn, both literally and figuratively.

In a modern world where GPS is common and our every move is mapped, come get lost in territorial Phoenix at You Are Here – opening in the Stevens-Haustgen Bungalow, Summer 2018.

You are Here is exhibited in conjunction with the Maricopa County Recorder’s Office, and supported in part by a grant from APS.

Plate Expectations: Victorian Dining, Decorum & Dishes – Learn Victorian dining etiquette, and see beautiful and rarely displayed pieces of our collection in this exhibit at the Rosson House.  From olive spoons to chocolate pots, oyster plates to tilting water pitchers, and both historic and prehistoric dining artifacts from archaeological digs at Heritage Square (on loan from Pueblo Grande Museum), this exhibit is sure to show you something you’ve never seen before!   Plate Expectations is on display February through October 2018, and is included with Museum admission.

Details – May is the last month you will be able to see the adornments, trinkets and trimmings that defined turn-of-the-century style.  This exhibit is on display through May 27, 2018 in the Stevens-Haustgen Bungalow at Heritage Square, with free admission.