How many dishes do you use in a day? How about if you’re having company over for a big holiday dinner? We’re guessing that, even with all those serving bowls and dessert plates you use, your table still runs short of all the dishes the Victorians used for their meals. Today, with our take-out food and paper plates, it’s hard to imagine what dinner at Rosson House would have been like with all the china we usually only break out for special occasions. But for Victorians, these were pieces they used every day. 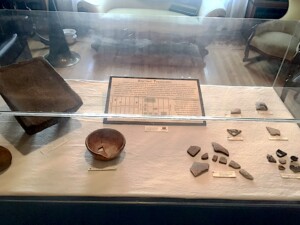 Pottery sherds found around Heritage Square during archaeological excavations, dating as far back as 1,100 CE. On display here for our 2018 exhibit, Plate Expectations.

People have been using pottery – articles made of baked clay – since the Mesolithic Era, or the Middle Stone Age. Sherds of the oldest known pottery that date back about 20,000 years was found in Chinese caves about a decade ago. The earliest pottery found in the United States comes from the Savannah River area in Georgia, and date back over 5,000 years. During the archaeological digs around Heritage Square, ancient Native American pot sherds were found that dated back almost a thousand years ago. Porcelain tableware is young enough, by contrast, to be sitting at the kiddie table.

Porcelain was developed in China over a thousand years ago. Though rare, it had been available outside the country before the Ming Dynasty (1368-1644 CE), but it was at that time that China began shipping enormous quantities of porcelain all over the world. Wealthy Europeans (mostly monarchs and aristocrats) loved it so much they began making their own porcelain in places like Limoges and Sevres (France), Staffordshire (England), and Meissen (Germany). Fragments of porcelain have even been found at archaeological sites in Jamestown, Virginia and St. Augustine, Florida, as have sherds of pottery made there locally by European settlers and Native Americans. George Washington collected porcelain, including a tableware set he received in April 1763. It was comprised of, “1 compleat sett Table China fine blue & white consisting of – 11 long Dishes 24 plates 12 Soop plates 1 Tureen Covr & Dish 4 Sauce Boats 4 Salts” (invoice from Robert Cary & Co, April 23, 1763) For most living in the American colonies, however, porcelain dishes were a luxury good because of the price of shipping and the fragility of the cargo. 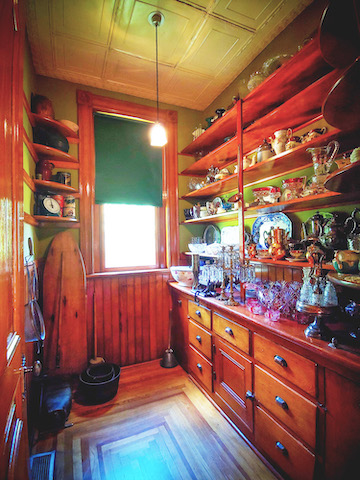 In the mid to late 1800s, growth of the US middle class, combined with mass production of ceramics, the advent of faster shipping methods (ie – trains and ships that were powered by steam engines), and the birth of the mail-order catalog industry all came together to create a perfect storm of porcelain plates. And bowls, platters, tureens, cups and saucers, and just about anything else you could think of. Cut glass, silver, and crystal got in on the act, too, just in time for people to show off all their newfound personal wealth on their dinner tables. The trend for dinner parties at the time was to have the meal served à la Russe (in the Russian style), with different courses served on separate plates. So naturally, you needed to have a plate or dish for each course. For a party of 10 people and a dinner that could have up to twelve individual courses, that’s at least 120 plates or bowls, not to mention serving pieces, glassware, and silverware. Let’s just say we’re glad we’re not the ones who had to do the washing up!

You could buy a 126 piece dinner set from Bloomingdale’s 1890 catalog for $14.49 (plain white porcelain), or their 139 piece set of C.F. Haviland’s “best French china” for $42.98. Not even a decade later, though, a 100 piece set (American made semi-vitreous china) was being sold by the Sears, Roebuck & Co. catalog for $4.98. Their imported 100 piece Haviland china set sold for $25.45, and was the most expensive of all thirty one dinner sets sold in that catalog (the Bloomingdale’s catalog only had four listed). Adding on to the dinner sets were additional sets – tea or coffee sets (with pots, cups and saucers, and sometimes matching plates, butter dishes, etc) and berry sets (with a serving bowl, and individual berry bowls or nappies). Add on to that an assortment of cut glass sets, which would include celery vases (highly prized at that time because of the rarity of the vegetable), spoon holders, cruet sets, and more. The 1902 Sears catalog had cut glass assortments of 26 and 39 pieces, for $2.68 and $3.45, respectively. It’s a good thing they had china cabinets and pantries. 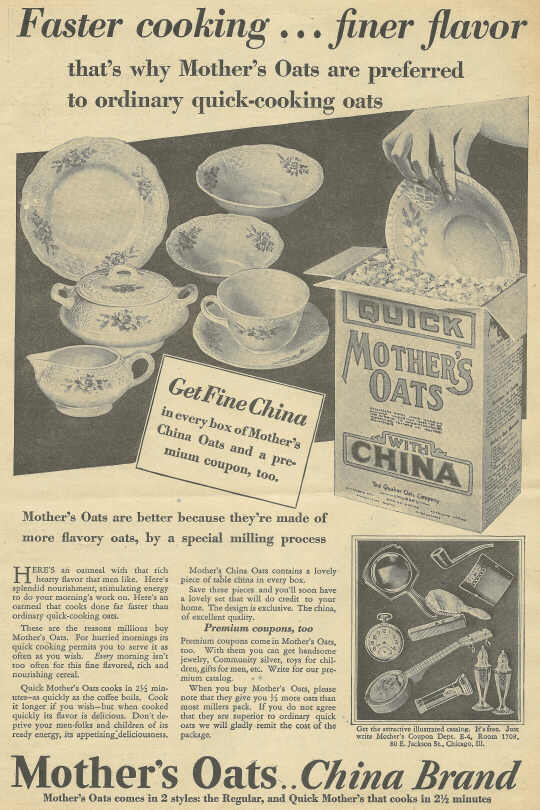 As tastes and economic situations changed, so did tableware. The Sears catalog that sold 50-100 piece fine china sets at the turn-of-the-century also sold more modest sets of 25 or 32 semi-porcelain pieces (for between $2-$3) in 1936. Molded glass dinner sets of 35 pieces sold for $1.98 – which was pretty cheap, but you could also get dishes at that time for free. Dinnerware and glassware companies partnered with grocery stores, food manufacturers, and even movie theaters to provide a free dish with purchase, usually Depression Ware glass (colored glass formed in a mold) or china. The companies sold their dinnerware at wholesale, and the partner gave it away to their customers in a bid to increase sales. The pieces were made from premade molds and were of lower quality than cut glass or fine china, but it allowed many people to get new tableware who otherwise wouldn’t have been able to afford it. It also allowed the original companies to stay in business and keep their staff employed. A win for everyone!

Learn more about mail-order catalogs from our blog article of the same name. Explore the history of glass from our article, A Glass Act. Discover what kinds of food the Rossons may have been eating on their fine china in 1895 from our article, Bon Appétit. 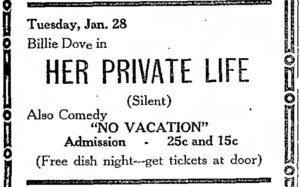