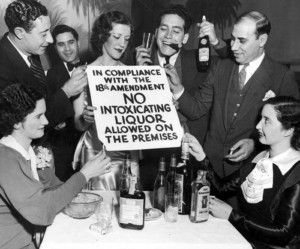 William (Billie) and Frankie Gammel purchased the Rosson House – “one of the best known in the southwest, with all the modern contrivances” – from S.W. Higley in the summer of 1914 for $17,000. Billie Gammel was a saloon proprietor, unfortunately for him and his family – unfortunately only because in November of 1914, the citizens of Arizona voted to go dry.

The ballot text to prohibit alcohol in Arizona read:

Proposed Amendment of the Constitution of the State of Arizona prohibiting the introduction into, the manufacture of, and the giving, exchanging, bartering, selling or disposing of ardent spirits, ale, beer, wine or intoxicating liquors, in the State of Arizona, and prescribing a penalty for the violation thereof.

Election results were 25,887 in favor (53%), and 22,743 opposed (47%).  Though the state was taken to court to prevent the amendment from being enacted (by the Owl Drug & Candy Co., the Adams Hotel, Melczer Brothers Wholesale Liquor, and Rev. Father Connelly of the All Saints Catholic Church of Tucson), their application was denied.

So, shortly after buying one of the nicest houses in town, Billie Gammel lost his job. We know that he tried several ways to make ends meet after Prohibition was enacted, including taking up ranching (according to the 1924 city directory), and opening a saloon south of the border (which was unsuccessful). By 1920, (according to that year’s census count) the family was boarding several lodgers to supplement their income. 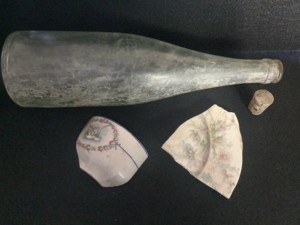 Artifacts found underneath the Rosson House during restoration, including a bottle and cork.

We also know that Billie Gammel was involved with the illegal sale of alcohol during Prohibition. When the Rosson House was being restored, a trap door was discovered in the pantry, and Prohibition era bottles were found stashed in the crawl space underneath (see picture to the right). There are also rumors that then Arizona Governor Hunt would occasionally stop by the Rosson House to drink “lemonade” on the front porch… All very interesting, but there is more conclusive proof of Gammel bootlegging – namely, a notice in the Arizona Republican on October 30, 1915, mentioning that William Gammel had been arrested for, “disposing of intoxicating liquor” (the second complaint against him in 8 months). His punishment was 10 days in the county jail and a fine of $300. His wife, Frankie, was named as well, and she had to pay a similar fine, but her sentence was deferred.

The Gammels had to pay their fines of $300 each, which would be over $14,500 today, adjusting for inflation! $300 was the maximum fine that could be levied against someone for breaking Arizona’s Prohibition law, and 10 days in jail was the least amount of time served possible. So, it could have been worse. The first person arrested for the sale of alcohol in Arizona in 1915 was a saloon owner (Mr. Louie Gherna of Tucson), and he was sentenced to 90 days in jail with a $100 fine. 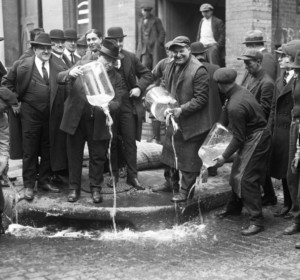 Penalties just got worse when the entire nation went dry in January 1919. Under the Volstead Act (which enforced the 18th Amendment), a first time offender could be jailed for up to 6 months, and fined as much as $1000. A second time offender could spend 5 years in jail and be fined up to $2000 (over $48,500 today). And that’s only for starters – by March 1929, Congress had passed the Increased Penalties Act, to expand initial jail time to up to 5 years, and to raise the maximum fine to not more than $10,000 (gasp – that’s $244,000 today). It also made most violations of the Act no longer misdemeanors, but felonies. The increase in penalties was not to trip up small-time bootleggers like the Gammels, but to hit the large, commercial-sized producers.

Whatever the penalties, the general consensus was that Prohibition created more problems than it solved. Even the Increased Penalties Act did not dissuade major bootleggers from the manufacture and transportation of liquor. Repealing the 18th Amendment was seen as a way to stop illegal activities, but, more than that, as a way to employ thousands of people during the Depression, and to gather more tax revenue for the government. The 21st Amendment was passed and finally ratified by the requisite three-fourths majority of states on December 5, 1933. Billie and Frankie Gammel continued to rent rooms in their home, and Billie eventually got involved with the legal selling of spirits – in fact he was listed in the 1945 city directory as a bartender, at the tender age of 77.