Picture yourself in the Rosson House kitchen at the turn of the 20th century. It’s likely pretty similar to what is there now, without a plastic food container or a fancy electric refrigerator in sight. So, what do you do with all those leftovers?! The truth is you probably wouldn’t have had those leftovers to begin with, because any food that remained after a meal would spoil quickly. Meal prep as it exists today is a luxury that comes with living in the age of the electric refrigerator/freezer.

There are ways of preserving food, though, that people have used for millennia. Evidence of people preserving food through drying has been found in the Middle East and Asia, dating back as early as 12,000 BCE. Mesopotamians were preserving fish and other meats in sesame oil and salt as early as 3,000 BCE. And cool/cold storage of one kind or another has been in practice all around the world – the Chinese harvested ice to chill food in 1000 BC; people from the Middle East, Greece, and Rome would store drinks in snow-packed pits; and in ancient India and Egypt, people would use evaporation to cool jars of food. Other techniques used to preserve food were smoking, pickling, larding, honeying or sugaring, and fermentation. 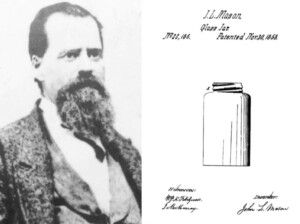 None of these approaches made food safe for long periods of time, or when carried across distances. But Napoleon Bonaparte of all people wanted to change that. Determined to build an ever expanding empire, and finding that “an army marches on its stomach,” in 1795 Napoleon offered a reward of 12,000 francs to anyone who could invent a safe and reliable way to preserve food. French scientist Nicholas Appert, who is considered the “Father of Canning”, won the prize in 1810. His process – he filled earthenware jars with food, corked them, sealed them with wax, wrapped the jars in canvas, and boiled them. His approach was picked up by the French navy, who used it to preserve and transport meat, vegetables, fruit and milk. English inventor Peter Durand created the method of sealing food in an actual tin can in 1810 as well. His invention was adopted by the English navy, so there were dueling food preservation techniques – a veritable food fight between the British and French on the high seas! In 1858, the glass “mason” jar used for canning was invented by American John Mason (see picture here, with his patent), and the apparatus was improved by American Alexander Kerr in 1915 to a jar that had a wider mouth, with the metal disk, permanent gasket, and threaded metal ring we’re more familiar with today.

Other than refrigeration, the other big step towards food preservation and safety in the 19th century was pasteurization, invented and patented by French chemist Louis Pasteur in 1865. Initially used in winemaking to kill most of the microbes that were unexpectedly turning wine into vinegar, pasteurization (ie – heating a food or liquid to a specific temperature over a specific amount of time) was also found to kill hoof and mouth disease (a virus) and bovine tuberculosis (a bacteria that could cause organ damage, severe spinal deformities, and even death), amongst many other diseases commonly found in raw milk at that time. Food and drinks today that are pasteurized include eggs, milk, juice, cheese, yogurt, butter, ice cream, honey, almonds and other nuts, vinegar, beer, wine, and lobster and crab meat. (Pasteur continued to study microorganisms and infectious diseases throughout his life, and used this knowledge to develop immunizations for cholera, anthrax, and rabies.) 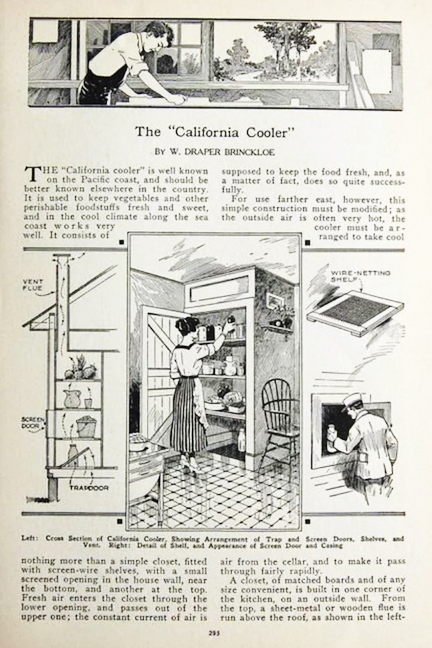 Cool storage was beneficial and readily available in households before refrigerators were invented, and included cellars, larders, cold pantries, and cooling cabinets like pie safes, California coolers, and Hoosier cabinets. Both in-house and root cellars are either entirely or partially underground, and are well insulated from outside temperatures. The other storage rooms or cabinets rely on a combination of airflow, insulation, and cooling materials like zinc or stone that naturally stay cooler to the touch than wood does. The Rosson House has a cellar and pantry, and restoration interviews with Georgia (Gammel) Valliere and Jessie Jean (Higley) Lane reveal that both places were used for food storage. The prep table in the middle of the Rosson House kitchen, once owned by the Goldberg family, uses zinc lining to keep food cooler for storage and preparation, as does the ice box refrigerator. There were also regular articles in newspapers during the time period that gave advice on how to prevent food spoilage. (Author’s Note: My great-grandfather built a three-room cabin in Colorado over 100 years ago that still exists and has an 8-10 inch deep window in the kitchen, with 3 shelves for food storage. It is screened on the outside, and in the summer dampened cloth can be hung over the screen and the combination of airflow and evaporation keeps food cool. They also stored food in a nearby stream. This was much more likely how people who weren’t well-to-do would store food at the turn-of-the-century without the fancy cabinets.)

Refrigerators and freezers really changed how people stored food. At first it was ice box refrigerators, which became popular in the US in the 1840s, and worked like our plastic coolers do now – ice kept the air in the ice box cold enough to preserve food for a time. Of course, the ice would melt and have to be replaced, making it not an entirely reliable source of food preservation. When Rosson House was built, there were two ice factories in Phoenix, making their own ice for people’s drinks and ice box refrigerators with commercial-sized freezing machines (find out more about it from our August 2017 blog article, On Ice).

But ice like that wasn’t just meant for food in houses. It was also made to help transport food across the country in refrigerator or “reefer” train cars. An engineer named Andrew Chase designed the reefer car in 1878 to transport beef from Chicago – the hub of the US meatpacking industry – all across the nation and even internationally. Meatpackers purchased the cars and contracted with railroad companies to haul them. Ice stations were placed along train routes to refresh the supply of ice along the way. In Phoenix, Arctic Ice Works was located on the corner of 9th Street and Jackson, right next to the railroad tracks, and we’re guessing that’s no coincidence. (see it here on a 1911 Sanborn Fire Insurance Map of Phoenix)

The first mechanical refrigerator made for the home was invented by American Fred Wolf in 1913. Named the DOMELRE (DOMestic ELectric REfrigerator), it had an air-cooled condenser and a compressor that sat on top of the refrigerator. The Frigidaire company created the first refrigerator that had the compressor within the interior of the fridge itself in 1918, and GE produced the first stand alone freezer in 1927. Electric refrigerators were still pretty expensive, though, at between $500-$1,000 per unit ($7,000-$14,000 today, adjusted for inflation), and frozen foods became a luxury item. But as costs dropped, sales went from 200,000 in 1926 to 6 million by the mid-1930s. And though it seems counterintuitive, one thing that drove sales was the Great Depression. Mechanical refrigerators allowed for less food waste, which was important at a time when more people weren’t getting enough food to begin with. Also, under the Electric Home and Farm Authority created in 1933, generous New Deals loans allowed people to be able to afford larger appliances like refrigerators and sales soared. Thanks to the aforementioned interviews, we know the Gammel family had an electric refrigerator that stood on the screened-in back porch at Rosson House, to the right of the door (as you face it). 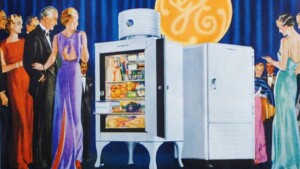 After World War II, mass production of refrigerators kicked into high gear, with new models over the years offering more ways to keep food fresh, including more shelves, special drawers, built-in freezers, water dispensers and ice makers, and coming in a range of different colors and styles. In the 1970s with the energy crisis, more emphasis was given to making appliances energy efficient, and the Energy Star label was created for appliances by the EPA in 1992. Refrigerators built in the 1970s can use up to five times more electricity than newer, energy star ones. Today, more than 8 million refrigerators are sold every year in the US, and around 200 million worldwide. That’s a lot of leftovers!