Lions and Monkeys and Squirrels, Oh My! 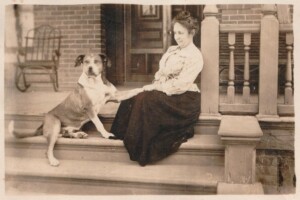 Mrs. Higley & the family dog on the Rosson House steps.

It’s finally October, when the Halloween decorations go up and the temperature goes down…eventually. To be honest, we don’t know if we’ve ever looked forward to the end of a year more than we have here in 2020. This year has been incredibly stressful for all of us – between the pandemic, the economy, and politics, it’s a wonder we all aren’t hiding under our beds until the New Year! One thing that has gotten many of us (including those of us at Heritage Square) through these tough times is our pets. It’s no surprise, as the CDC says that having a pet can decrease your blood pressure as well as your cholesterol and triglyceride levels, and can lessen feelings of loneliness. So, turn off the news and spend more time with your pets – it isn’t procrastination or laziness, it’s self-care!

Victorians spent a lot of time around animals as well – much more than we do today, even with quarantine. Mostly, these were working animals – horses (as the main mode of transportation), and farm animals (as many more people raised animals for food at that time). Though pets could also help out around the farm or the home (for security, pest control, etc), they are on a bit of a different level, with a focus on companionship instead of or in addition to work. 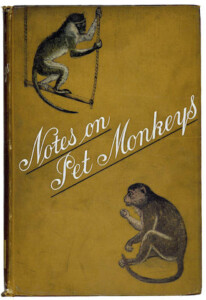 Some turn-of-the-century pets were obviously meant to be companions, like the Higley family dogs (one pictured here with Mrs. Higley), and the ponies Jessie Jean talked about in an interview with Heritage Square in the 1980s. But the Higleys kept at least one wild animal – their pet deer, Bunny – as did many other people from that time period, including animals like lions, tigers, bears (oh my!), monkeys, ravens, and even squirrels (like Pete the Squirrel, owned by US President Warren G. Harding, pictured below). The Gammel family at Rosson House kept peacocks, pheasants, an opossum, and two parrots! Most turn-of-the-century pet owners had dogs and cats, though, just like we overwhelmingly do (in 2018, Americans owned an estimated 76 million dogs and 58 million cats, according to the American Veterinary Medical Association). Their pets were very much a part of their families as well, and were spoiled, pampered, and loved. Famed New York society hostess Maime Fish threw an extravagant birthday party for her dog and 100 other canine guests. Her dog showed up to the event wearing a $15,000 diamond collar (that’s approximately $400,000 in today’s money, folks, for a dog collar!). In 1921, Mrs. and Mr. Cole of San Francisco had marital problems because she insisted on letting her pet sleep in bed with them at night, and because he refused to provide for the animal. A bit overboard, you say? Would you change your mind after learning the pet was a lion…? (Hope they had a really big bed!)

People in 19th century not only owned animals, but they cared about them just as much as we do. The first substantive anti-cruelty law in the United States was passed in New York in 1829 (eight years prior to the Victorian Era). It declared that, “Every person who shall maliciously kill, maim or wound any horse, ox or other cattle, or any sheep, belonging to another, or shall maliciously and cruelly beat or torture any such animals, whether belonging to himself or another, shall upon conviction, be adjudged guilty of a misdemeanor.” If convicted, a person could spend up to a year in jail. 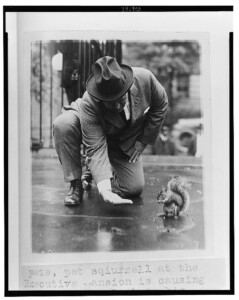 Laws and penalties grew broader over time as the well-being of animals became more important to society. The ASPCA (American Society for the Prevention of Cruelty to Animals) was established in 1866 by Henry Bergh, and he worked to enact legislation (backed up by actual enforcement) that took more significant steps towards protecting animals. The new laws viewed animals as creatures capable of feeling, and deserving of protection and care in their own right instead of merely valuable as pieces of property.

Information for this article was found in the above-mentioned places, as well as from the MSU Animal Legal & Historical Center website, the American Veterinary Medical Association, the CDC, the Presidential Pet Museum website, the January 30, 1920 Topeka State Journal (via Chronicling America), the Ephemeral New York blog, and in Heritage Square interviews with Jessie Jean Lane (Higley) and Georgia Valliere (Gammel). Thanks for reading!

A Question for you

Is there a history topic we haven’t discussed that you’d like to hear about? Send us an email and let us know! We can’t make promises to use every idea, but would like to know what you’re interested in learning more about. Thank you!