Originally, Memorial Day was known as Decoration Day, and the holiday and practice of decorating the graves of those who died in service of our country dates back to the Civil War.  Many local communities already honored their war dead.  They were, after all, their friends, husbands, brothers, fathers and sons.

The call to recognize the day nationally came from General John A. Logan – a veteran, Illinois state legislator, and head of a Northern Civil War Veterans organization – who declared:

“The 30th of May, 1868, is designated for the purpose of strewing with flowers, or otherwise decorating the graves of comrades who died in defense of their country during the late rebellion, and whose bodies now lie in almost every city, village and hamlet churchyard in the land.”

After World War I, Decoration Day was recognized as a day to honor those who gave their lives in all conflicts serving their country.  It became known as Memorial Day in 1971, when it was changed to the last Monday in May, and became a federal holiday. At Heritage Square, we honor all men and women whose sacrifice has made our country and our world a better place – in particular, Lt. James S. Higley, who grew up at the Rosson House, and who, as a First Lieutenant in the Army, lost his life on September 28, 1918, just days after arriving in France.  He was posthumously awarded the Distinguished Service Cross for, “Extraordinary Heroism in Military Operations Against an Armed Enemy”.  His superior officer, Captain W. N. Simmons, included these words of condolence in a letter to James’ family:

“We officers deeply loved and respected your son, and the men of the Company would, and did, gladly follow him anywhere. In every way he lived and died, an example of the highest ideal of a gentleman and an officer… I am glad to inform you of the magnificent manner in which Jim conducted himself when the great test came. I shall always revere him in memory… I extend my deepest sympathy to you in your great loss.”

This last picture is of the family parlor of the Rosson House, taken in 2017 during the Dressing Downtown exhibit.  In it you see a picture of James, along with his Distinguished Service Cross (on loan from the Burnett and Burke families), and a World War I officer’s uniform (on loan from Sharlot Hall Museum, Prescott). 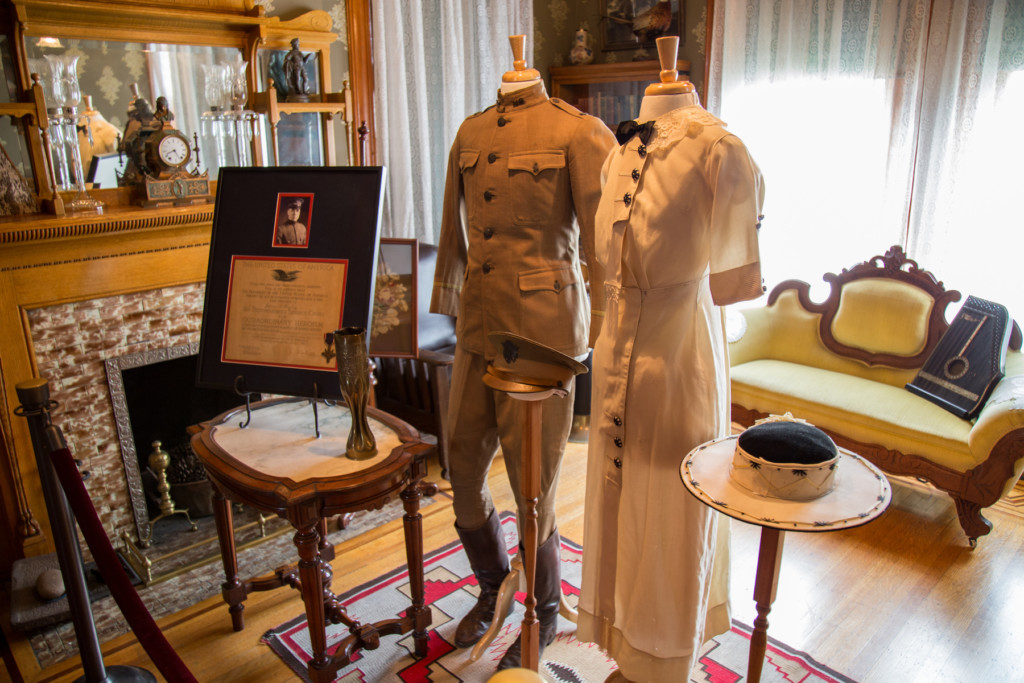