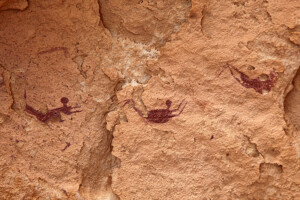 It’s impossible to know exactly how long humans have known how to swim, or why they even started swimming to begin with. Did they jump into the water to catch a fish, or maybe to escape being caught by predators themselves? Or was it more like the old, “Why did the chicken cross the road?” joke, where they simply made their way across a body of water to get to the other side? Though we can’t answer that question, we do know that there is evidence of people swimming that dates back to the Neolithic Era like the wall paintings found in the Saharan Desert Wadi Sura (shown here to the right), called the “Cave of Swimmers” and estimated to be created around 7,000-4,000 BCE. Many ancient civilizations even created large swimming pools – both for religious bathing (like the Great Baths of Mohen-jodaro in Pakistan, c.3000 BCE) and for recreational enjoyment (like the vast bath facilities found in the Roman empire as early as 2 BCE which included large, open-air swimming pools).

We have to skip ahead over a thousand years before the first swimming pool was built in the United States – the Cabot Street Bath opened in Boston in 1868, though it was located in a neighborhood filled with poor immigrants, and functioned more as a place to get clean more than as a recreational spot. Swimming, for whatever reason, was of course popular before swimming pools existed here in America. People would paddle around in the ocean, lakes, rivers, and canals (we’re looking at you, Phoenix!), particularly during the hottest months of the year. In 1693, John Locke supported teaching children how to swim, saying, “The advantages to health by often (swimming) in cold water during the heat of the summer are so many that I think nothing need to be said to encourage it.” Even George Washington was known to take a dip in the Rappahannock River, once having his clothes stolen while he swam in his birthday suit! (FYI – He was 19 years old at the time, and lucky for us cameras weren’t invented yet.) Martha Custis Washington evidently liked to swim as well, though she had a special bathing gown made up from a chemise that had pieces of lead sewn into the hem, preventing it from billowing up in the water and showing anything scandalous, like her legs. 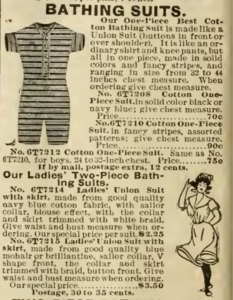 Swimming with a member of the opposite sex was a no-no, so going au naturel wasn’t too racy, for men at least. When not swimming in the altogether, they would wear simple linen shorts or just their drawers. But during the Victorian Era there were more strict rules about modesty, and men would begin wearing swimwear that was similar to union suits (with an attached short-sleeved top and pants or knee-length shorts on the bottom). Already wearing long gowns for propriety when swimming and even corsets (!!), women’s fashion would go a step further with bathing costumes that had wider skirts (generally knee length) and full leggings or bloomers underneath. Swimwear was often made of wool, serge, or flannel, in dark colors that wouldn’t turn transparent when wet. As you’d imagine, women’s bathing costumes would get pretty heavy, and were really made more for wading in shallow waters than actually swimming. As was typical during the 19th century, children’s swimwear fashion mirrored that of adults, though they were given more leeway to show bare legs (as you can see in the picture at the top of the page).

In the 1900s, fabrics like a stretchy ribbed jersey made by Jantzen (a company who first used the phrase, “swim suit” – see their add on this page) and rayon were used to make swimwear lighter for everyone. Both men’s and women’s bathing suits became more form-fitting and streamlined. Men’s suits would first evolve into what was essentially a tank top and attached pair of shorter shorts, and then go topless (as it were!), inspired by Olympic swimmer and movie star Johnny Weissuller’s bare chest in the 1930s Tarzan movies. Women’s suits had a more dramatic transformation – sleeve length shrank and pants/bloomers got shorter, too, first traveling up to knee-height, then to mid-thigh. Overskirts continued to be used, but become much more contoured, and necklines dipped. Rules and regulations would see women policed for the overall length of their swimwear – if she showed too much leg above the knee, a woman could be fined or even jailed for “public indecency,” as competitive swimmer Annette Kellerman was in Boston in 1907. Here, Hollywood’s influence prevailed as well, popularizing women wearing shorter skirts, swimwear, and even shorts. But bathing beauty Esther Williams surely sealed the deal when she swam to stardom on the silver screen wearing a daring two-piece suit in the early 1940s. 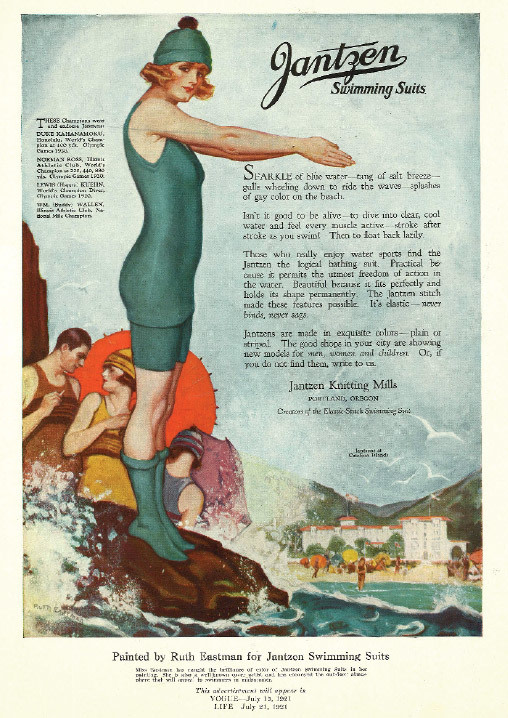 Swimsuits wouldn’t stop there. They continued shrinking in the post war years. The bikini, which covered much less territory than the two-piece suit Esther Williams wore, was invented in 1946; and the men’s Speedo briefs (also knicknamed budgie smugglers!) first appeared on beaches in 1961. These days you can find swimwear of all shapes and sizes – from bikinis to board shorts to burkinis – all designed for the comfort level of the wearer. Made with modern spandex, nylon, and lycra, suits are treated to prevent wear and tear from chlorine and other pool chemicals, and even to prevent sunburn. That’s quite a step up from heavy flannel and wool!

Check out the pictures of Rosson House residents Jessie Jean and James Higley in their swimwear and see how Victorian Era people dressed for a day at the beach in our article from earlier this year, Victorian Vacations. Learn how early Phoenicians beat the heat in our previous article, How Phoenix Stayed Cool.

Information for this article was found

World Clothing and Fashion: An Encyclopedia of History, Culture, and Social Influence, by Mary Ellen Snodgrass, 2015; the Fashion Institute of Technology, the International Olympic Committee; Time Magazine; Colonial Williamsburg; the International Journal of Aquatic Research and Education; the World History Encyclopedia; The Radical History of the Swimsuit virtual exhibit; and Vintage Dancer.

As usual, we found much more information about swimming history than we were able to fit in this article. You can read more about the sometimes contentious past of public pools from this NPR article. Read about the history of swimming in the Phoenix area canals from this article by Salt River Stories.