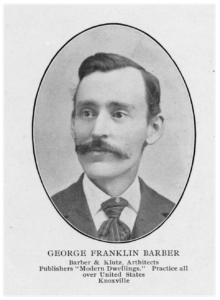 The Rosson House predates mail-order kit homes, but we believe many of the interior materials were ordered from catalogs, including the wallpaper, the parquet floors downstairs, the door hardware, and possibly even the staircase in the foyer.  The Rossons used architect A. P. Petit to help design and build their house, but the overall house plan may have been taken from a book by an architect named George F. Barber.

Barber was a self-taught and very successful architect at the turn-of-the-century who created a mail-order business that sold house plans and blue prints to a burgeoning middle class. He began his career as a carpenter, and learned how to be an architect by reading books on architecture and construction. He opened his own firm, publishing catalogs, books, and even a monthly magazine, producing over 800 designs and selling approximately 20,000 house plans.

The Barber plan that most resembles the Rosson House is Design No. 1 (pictured here) from his 1890 book, The Cottage Souvenir No. 2, A Repository of Artistic Cottage Architecture. 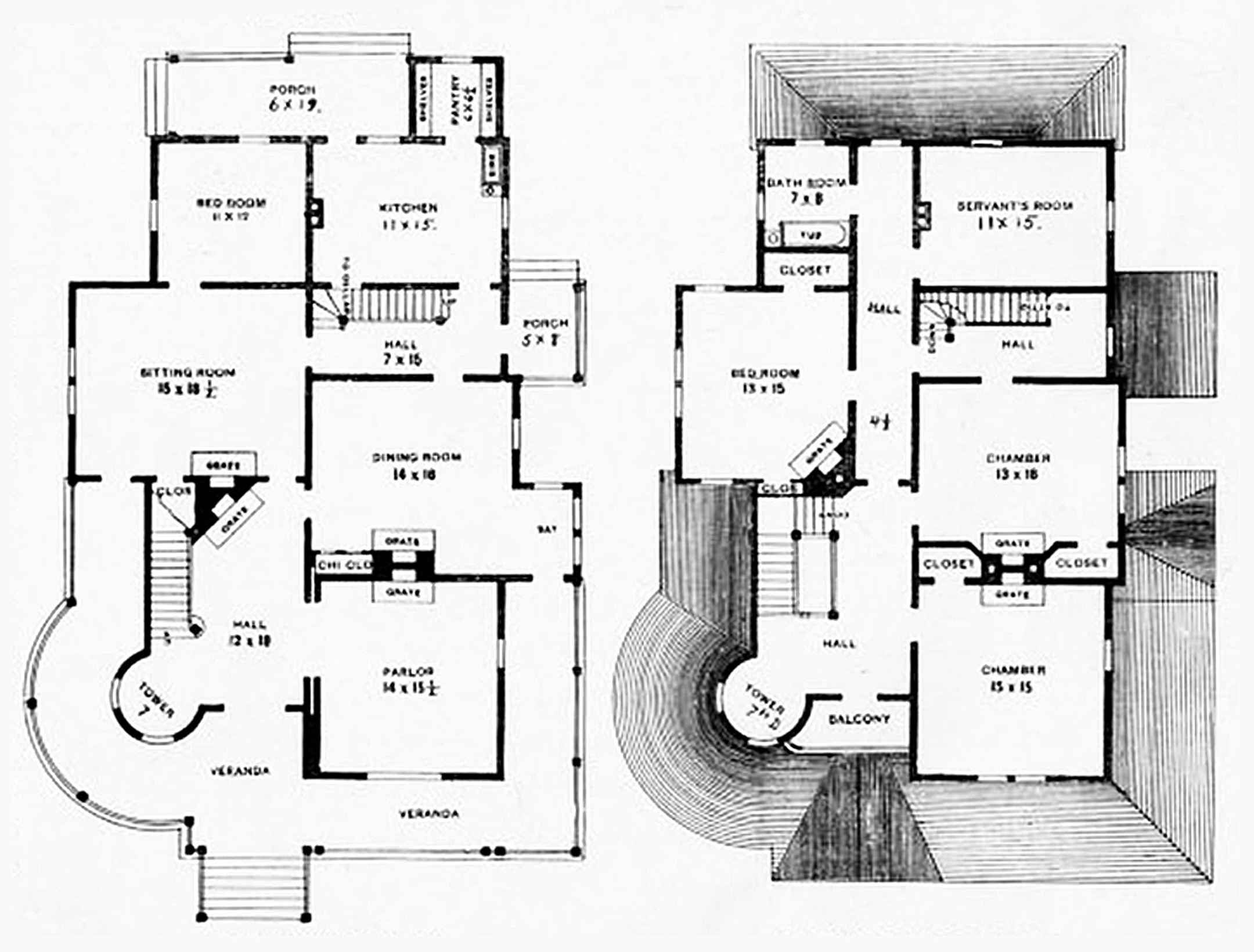 It is described in the book as a, “house of ample and convenient room, compact and well proportioned, of rather plain design, yet sensibly and tastefully finished… The chambers are ample in size and all are provided with closets.” As described, building the house was supposed to cost $5250 – approximately $2000 less than what the Rossons paid for their house. Visitors to the Rosson House will notice the final layout changed the floor plan to include a back parlor, office, and hallway downstairs, with two fewer fireplaces (and a slightly different fireplace layout). Balconies were added upstairs, the front two chambers were connected with a door, the fireplaces were moved, and plumbed sinks were added in each room.

Whether or not the Rossons used a mail-order Barber plan to design their house, they definitely used mail-order catalogs to outfit it. Mail-order catalogs had boomed in popularity across the United States with the growth of the middle class, cheaper and faster manufacturing of materials, and the expanded railroad system. In the later 19th and early 20th century, well-known catalogs like Sears Roebuck and Montgomery Ward not only sold clothing, table ware, agricultural implements, buggies and coffins (seriously), but they also sold light fixtures, construction and carpentry tools, and even toilets. Victorians had catalogs completely dedicated to hardware as well, like the Hammacher Schlemmer and Hibbard, Spencer, Bartlett & Co. catalogs. As you can see in the picture here, the latter of the two hardware catalogs is where the Rossons found their distinctive doorknobs. 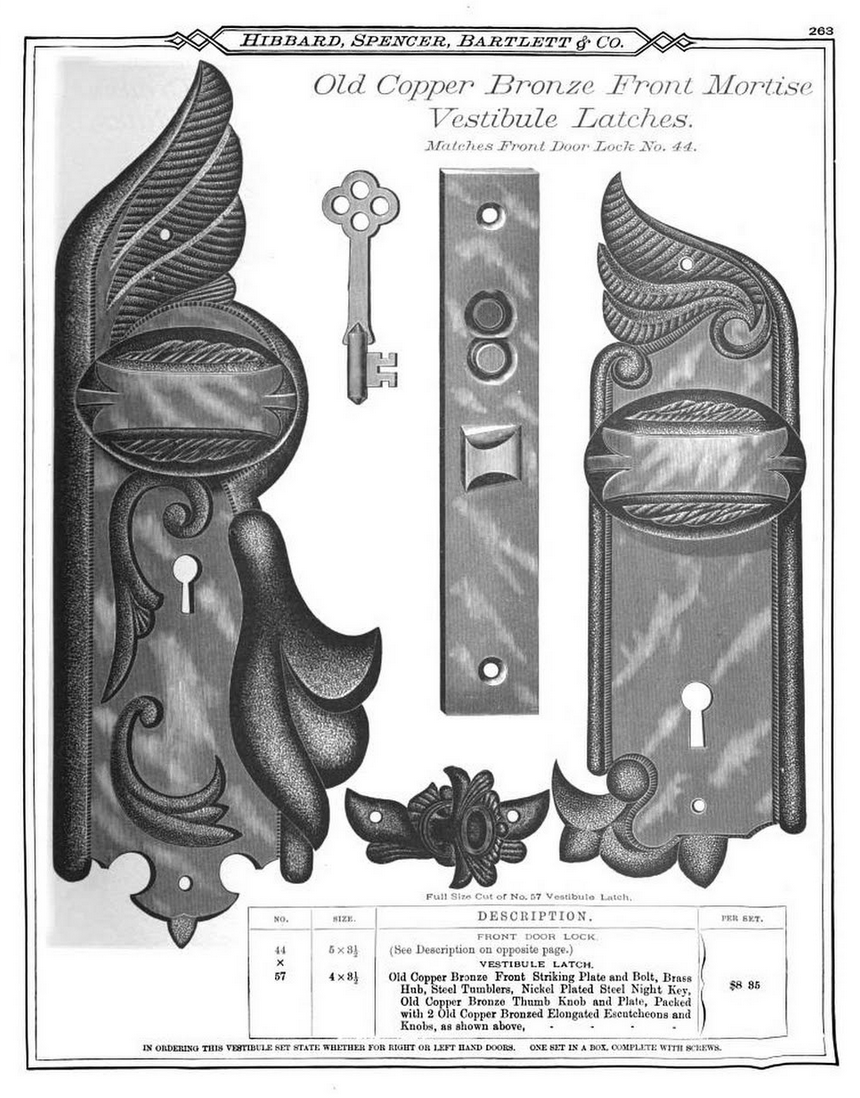 By 1906, people could order a complete house kit from a catalog instead of all of the parts individually. According to the 1909 catalog by Aladdin Houses, a kit would include blueprints like George Barber sold, and everything to complete house entirely – all lumber cut to fit, joists, studding and rafters, siding, flooring, roofing, porch materials (timbers, columns, railing, steps), doors with trim, door locks and hinges, windows with sashes and trim, hardware and nails, plasterboard, baseboards, and enough paint for two coats of the interior and exterior of the house. It would also include a step-by-step manual for building the house. You’ll notice the list does not include plumbing or electrical wiring. Their cheapest houses, two and three-room houses at or around 250 square feet, do not include bathrooms. By 1919, the company had a special booklet customers could order that included such extras as bathroom fixtures, electric lighting, and heating systems. Sears Roebuck and Montgomery Ward (as Wardway Homes) also sold kit homes for many years, but their popularity waned in the 1930s due to the Great Depression.

Many houses designed by George Barber have been torn down, including the H. H. Kincaid house of Knoxville, TN, (pictured here) that was built according to his Design No. 1, and that so resembled the Rosson House. Several are still around, though, and a semi-complete list of houses built according to his plans is available on Wikipedia. You can find Barber’s The Cottage Souvenir No. 2 book on The Knox County Public Library website, in the Calvin M. McClung Digital Collection. Find out more about kit homes here, and learn how we found where the Rosson House doorknobs came from on our previous blog here. 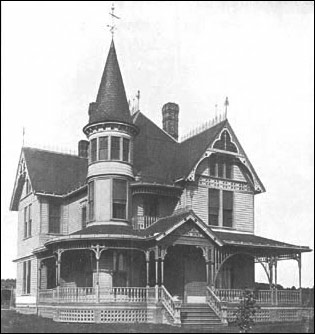 Information for this article was found on the websites linked above, as well as on The Society of Architectural Historians website and the North Carolina Architects & Builders website.  The c.1910 Sears Roebuck Rodessa house pictured at the top of the page is their design no. 3317 – Modern Home, with, “Monthly Payments as Low as $25 to $35.”  Its five rooms included a bathroom.

Don’t forget – May is Historic Preservation Month! Support your favorite Victorian house museum by taking a tour, becoming a member or volunteer, shopping at our museum store online, or making a donation. Your contributions help preserve and protect this unique historic landmark!