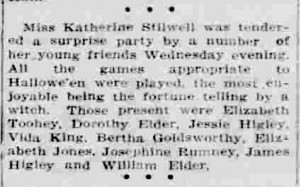 A couple of familiar Rosson House names at a Halloween party in 1906.

Today, Halloween is for dressing up, decorating our houses, Trick-or-Treating (and then eating way too much candy), having parties, playing pranks (some innocent, and others definitely not), and getting the pants scared off of you (whether with a movie or in person at a haunted house).

For Victorians, the holiday was seen as a quaint celebration during harvest time, and a time for getting together with friends. Trick-or-Treating didn’t come around (in North America at least) until the around the 1920s, so your best bet for Halloween “treats” were at a party. They had bubbling pots of candy that would be poured over a plate of nuts, then cooled, broken into smaller pieces and eaten. You could also bob for apples, eat candied or caramel apples, or other harvest time treats. 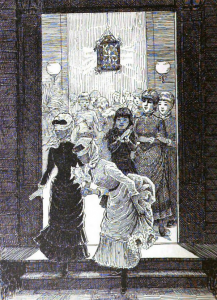 Instead of watching the latest horror movie, Victorian Halloween parties had more live entertainment – in the form of parlor games, fortune telling (likely with someone dressed up as a gypsy or witch to play the part), and readings. The parlor games involved many that would supposedly foretell a young person’s marital future, including pouring molten lead from a spoon into a pan of cold water, and the ensuing “fanciful” shape would reveal the kind of husband a young lady would later marry. Kind of like an ink blot test, only with a hot and dangerous metal! Let’s just hope they didn’t use the pan for cooking anything after this fun game…

People might dress up for these parties, but for sheer spookiness, nothing could touch having a reading. Some of the absolute best scary and/or mysterious stories of all time came from the Victorian Era (and before) – Mary Shelley’s Frankenstein (1818), Washington Irving’s The Legend of Sleepy Hollow (1820), Sir Arthur Conan Doyle’s Sherlock Holmes books (beginning in 1887), Bram Stoker’s Dracula (1897), and pretty much anything and everything Edgar Allen Poe wrote during his short life (b.1809 – d.1849). 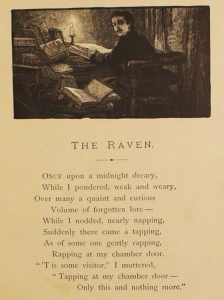 Here are a couple of interesting articles about Halloween parties from the November 3,1917 Arizona Republican:

“Mesa – A Hallowe’en prank, on the part of a lot of boys, may cost G. E. Thompson of Lehi a valuable mare. Some youngsters with a wrong idea of Hallowe’en fun, opened the gate and drove out five head of horses, four of which have been recovered. But the fifth, and one which he prizes highly, has not been found. In today’s Republican, the victim of this thoughtless and wrongful act is offering a reward for the return of the animal.”

“Chandler – Hallowe’en was celebrated at the Chandler high school in fitting style. In the darkened buildings, which were used for ghostly haunts, were unexpected surprises in the way of spooks. Goblins’ screeches were mingled with those of the timid maidens who found their way blocked by some horrible shape. In addition to this there were the time-honored games. These finally gave place to a feed which was a decided credit to the entertainment committee.”

And a Halloween party invitation from November 2, 1919:

At eight o’clock, come have some fun

At Marcia’s house on Third Avenue

And don’t you dare wear anything new.

Put on a mask and talk so queer,

The witches won’t know you, (they will be here).

At ten o’clock you must hurry away

For that is the hour the “bad” witches play.

And woe to the one who is found about.

“Er the Gobble-uns ‘ll git you

If you don’t watch out!”

Victorian Halloween information was gathered from, How to Amuse Yourself and Others: The American Girls Handy Book by Linda Beard and Adelia Belle Beard (1888).