At the turn-of-the-century, opportunities for women to work outside the home were fairly limited – only a select few occupations were considered suitable for women to earn their living. One of these jobs was sewing work. Whether it was smaller in scale, taking on mending and repair at home on a piecemeal basis; becoming a seamstress at a shop; or if it meant employment at an enormous factory with hundreds of others, these jobs allowed mostly lower class women to contribute income to their families that was often essential for survival. 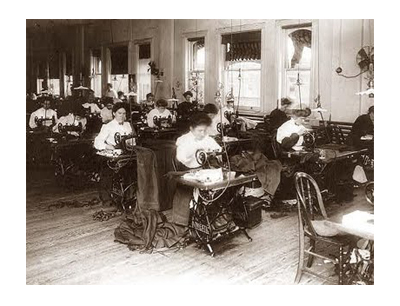 Prior to the Industrial Revolution, any kind of large scale garment production was a part of what was called a cottage industry, where suppliers brought materials to women in their homes for them to hand stitch, and finished products were then returned to the manufacturers to sell. The inventions of the spinning jenny (1764), power loom (1784), cotton gin (1794), and the sewing machine (1846), changed everything. Ready-to-wear clothing could be mass-produced at previously unheard of levels, and fiber mills and garment factories practically sprouted up overnight to help meet the rising demand for cheaper clothing.

In large, urban areas like New York City, thousands of working class women, many of them immigrants, flocked to mills and manufacturers in the Garment District, where they contributed to their family incomes by working 12 hours or more a day. The women were paid an average of $0.85 daily to make garments (Trends in the American Economy in the 19th Century, Princeton University press, 1960), as opposed to men in similar jobs who earned twice what women did, and children (some as young as six!), who earned about half. In 1900, a 55-hour workweek at $0.85 a day is $286 a year (but only if the work was not seasonal), and is approximately $8400 in today’s money. Not much money, and often in dangerous working conditions. They had poor lighting, inhaled toxic chemical fumes, could take few or no breaks, had no safety equipment, and many times were locked into the rooms where they worked. Practices like these led to tragedies like the Triangle Shirtwaist Factory fire in 1911, where 146 women and girls died (the youngest were 14 years old), and that in turn led to new laws governing workplace safety, including child labor laws. 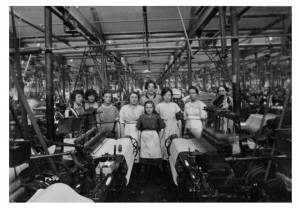 If a woman was more skilled in sewing, and if she was lucky, she could make a living as a seamstress, as did two women who lived at Heritage Square – Anna and Marguerite Haustgen. A skilled dressmaker could make twice or more than a woman working in a garment factory, but they still had to work very hard for their livelihood, hopefully under better working conditions.

Anna and Marguerite emigrated to the United States from Luxembourg in 1914. Their brother, Edward, lived here in Phoenix already, and had purchased the Stevens House and Stevens-Haustgen House (at 604 and 614 E Adams St, respectively) to rent. In 1918, Anna and Marguerite moved into the Stevens House, and used the back bedroom as a dressmaking shop. They owned mortgages on both properties, however, and rented out the smaller home. By 1920, they were living there with their widowed mother (Mary Haustgen, age 71), and their nephew (George Bernard, age 9). Two lodgers (John Powers, a salesman, age 52; and John McIver, a pressman, age 43) lived with them, contributing to their income. By the way, that’s six people – five of them adults – sharing a two bedroom, one bath home!

By 1921, Anna and Marguerite had saved enough to build another rental income property behind their home – the Duplex, where the Heritage Square Foundation office is located. Unfortunately Anna did not live to see it completed, as she passed away in May 1921 of encephalopathic lethargia (find out what that is here) at the age of 44. Marguerite was listed as living at the Stevens-Haustgen House in the 1950 census, and lived there until her death in 1952.

(Additional Note, June 2021: Marguerite Haustgen filed paperwork to became a naturalized citizen of the United States in 1916. So far we haven’t found evidence of the paperwork being finalized, but we’re still looking!)