Route 66 might be Arizona’s (and our nation’s) most famous road, but there were roads that crisscrossed both long before that bit of pavement hit the desert sand. We may think of mostly in how they relate to cars, but roads existed thousands of years before the motorized vehicle. In fact, the oldest known paved roads – mud brick in the Indus Valley and stone in Mesopotamia – date as far back as 4000 BCE. Mayans started building their sacbe, a series of roads, walkways, causeways, and dikes that connected communities throughout their empire, around 600 BCE. The Romans (all roads lead to Rome!) and Chinese also created vast paved road systems, beginning around 300 BCE, that connected trade routes for the latter, and military routes for the former.

Many roads in America began as paths and trails originally established by Native Americans, and used for trade, hunting, and communication. The earliest European immigrants followed those paths, and would eventually make some into bigger roads that wagons and carriages could travel. Until the later part of the 19th century, road “pavement” would consist of materials like logs, wood blocks, bricks and stones to create a roadbed (for example, Pennsylvania Avenue, which runs in front of the White House, was paved with wood blocks after the Civil War). Asphalt and coal-tar roads – made when a road surface (usually stone or concrete) was sealed by tar, extending its life – began appearing in urban areas by the late 1800s. 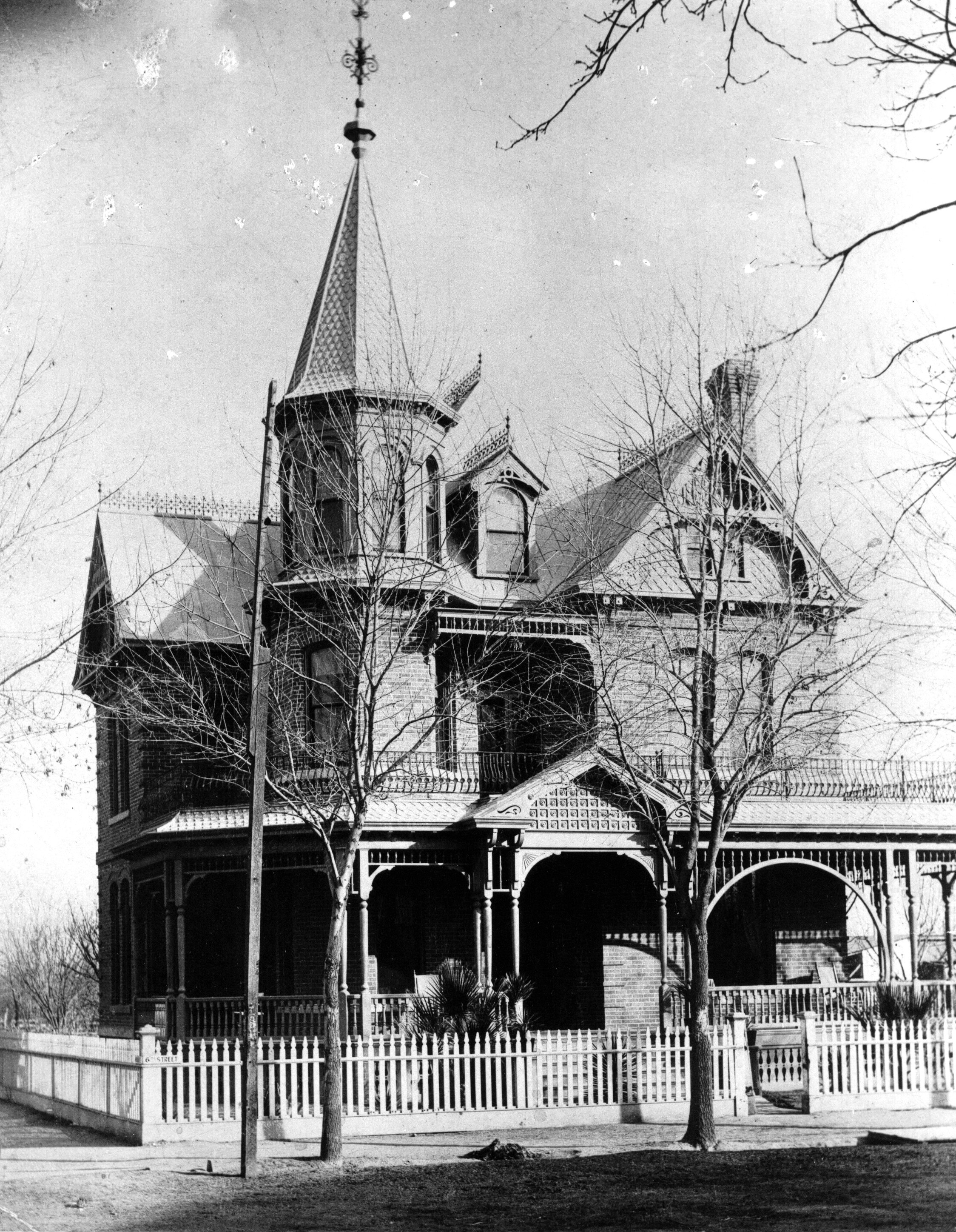 In Territorial Arizona, the first main roads were built by the US military in order to move people through the area – first for troops during the Mexican-American War, and then for prospective miners for the California Gold Rush. As the population grew and the Territorial Legislature was formed, responsibility for road building rested on individual municipalities and counties. Phoenix mandated street and sidewalk grading in 1886, and gutters in 1887. City streets at the time were unpaved dirt roads, and many had small ditches that ran along either side to carry water runoff and other, more unsavory things as well (see the picture of Rosson House, c1900, on the very right-hand side and in line with the front gate you can see a little wooden bridge that covers the ditch there). As early as the late 1870s, city streets were sprinkled with water to cut down on dust (something that still feels familiar today). In 1893, an accusation was made during a city council meeting that street sprinklers were being paid under the table to favor some streets, thereby neglecting others.

Wealth definitely had an effect on how a neighborhood’s streets were treated – early Phoenicians didn’t want to be taxed to pay for citywide infrastructure, but would advocate and even pay for their stretch of street to be graded and graveled. When Phoenix in 1911 specified what materials could be used to pave city streets, owners within the central business district together paid over $100,000 to have the Barber Asphalt Paving Co. (est. 1883) pave their streets. Wanting more streets to be paved, Phoenix would ask the Legislature to pass a measure that forced property owners to foot the bill, putting liens on owners’ property until they were paid. Though their focus seemed to be on paving all city streets, poorer neighborhoods, which were principally made up of Latinx and African American communities, were overlooked, with streets remaining unpaved well into the second half of the 20th century. Some of those neighborhoods no longer exist, as the people were forced out, and buildings were torn down and paved over when the interstate came through Phoenix (the same happening to minority communities throughout the United States). 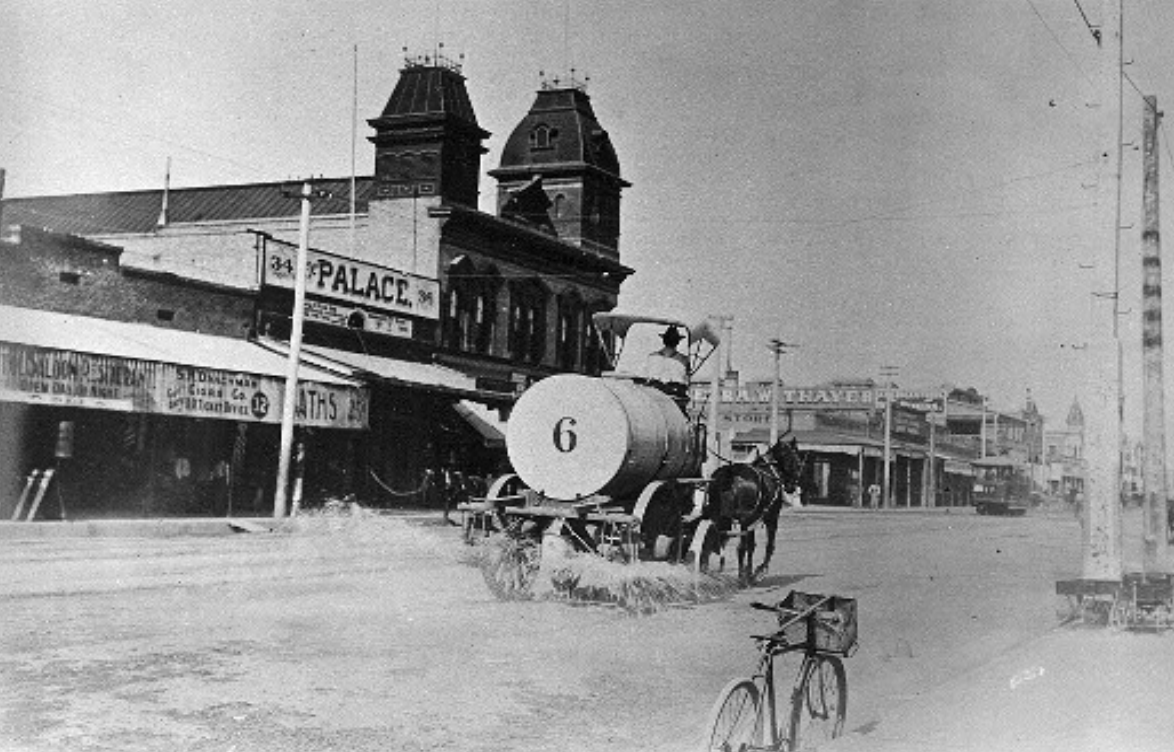 During the Depression, the federal government created the New Deal, which funded infrastructure nationwide through the Works Progress Administration, the Civilian Conservation Corps, and the Public Works Administration (just three of many). These new departments would go on to complete enormous projects like the construction of the Lincoln Tunnel, which connected Manhattan to New Jersey; the Overseas Highway, which connected Florida to Key West; and (closer to home) the Salt River Project and the Hoover Dam. But there were multitudes of smaller projects that were completed, including hundreds of thousands of dollars invested employing Arizonans to improve and pave roads, bridges, and sidewalks here in their own communities.

As time goes on, so do road infrastructure projects. Last year, the City of Phoenix started a pilot program to coat streets with a light grey sealant in several neighborhoods. It’s a material that protects the street surface, but also reflects light from the sun instead of absorbing it like the darker asphalt does, reducing the urban heat island effect. The initial application of this new material produced a 15° cooler street surface, and we’re excited to see the results of this project when they’re released. Other new technology is changing the roads we drive on as well, as people are now using recycled plastics to build new roads, making roads that glow in the dark, and creating “smart roads” with sensors that can alert drivers to traffic jams and immediately alert the authorities when a crash occurs. (Fingers crossed that flying cars are next up on that transportation technology list!) 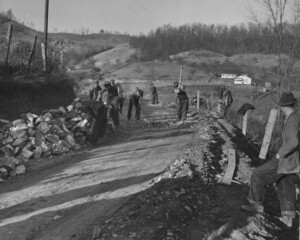 Information for this article was found in the Phoenix Streetscape Conservation Report (2010); Good Roads Everywhere: A History of Road Building in Arizona (May 2003); Library of Congress Research Guides and Chronicling America Newspaper Archive; AZ Central; the US DOT Federal Highway Administration; Smithsonian Magazine (on bicyclists, and on infrastructure); ThoughtCo; Britannica; Asphalt Magazine; and the Living New Deal.

We are thrilled to report that Rosson House has reopened! Head over to our Rosson House webpage for more information, and to purchase tickets (now for sale in person and online). We’re also getting back to para-normal with our limited VIP tour, Ghosted @ Teeter House, and tickets are available!

Stop by soon and support your favorite local landmark.