Most people in Arizona did not have air conditioning in their homes until after World War II (1945). That means for most of Arizona’s history, people lived here without air conditioning. So how did people stay cool in Arizona? 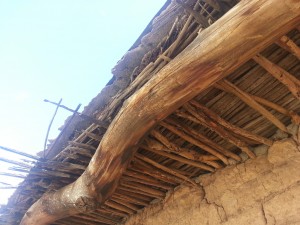 American Indians lived in Arizona for centuries building homes out of natural materials; one of the main materials they used was the caliche* rich soil found in central Arizona. When the area that is now Phoenix was resettled during the 1860s, many people lived in houses made of adobe blocks.

Adobe is made from dirt, water and straw – mixed together and dried in the sun. Adobe is much cheaper than brick, and helps homes to stay cool because of the way it distributes heat (it has high thermal mass). Adobe can be considered a “green” building material; though, it requires a lot of upkeep and can turn into mud when it rains.

Later in 19th century Phoenix, people started making houses out of clay bricks, which are not as good at keeping homes cool.

To help stay cool, many houses had high ceilings to pull up hot air. Houses also had “sleeping porches.” During the summer, families in Phoenix would sleep outside on their porch. Some families even put water on their sheets to help keep cool.

* Caliche is the term for calcium carbonate deposits that makes up much of the soil in Arizona, making digging very difficult. Caliche also helps to hold adobe bricks together.

This activity teaches children about historic building materials through the creation of a miniature adobe brick/block. For homes made of adobe there is a precise ratio of clay, sand and straw. For this exercise sandy soil can be used instead of clay.

Steps for Making a Brick/Block

1. Mix 2 parts of sandy or caliche rich soil to 1 part
water to a half part straw 2. Stir the mixture until it is the consistency of wet
play-dough (add water/dirt/straw as needed)

3. Pat the mixture into a mold (half of an empty milk
carton works great) 4. Place the mold in a sunny/warm place. Allow to dry
until the edges of the block pull away from the mold
(2-3 days)

5. Cut/tear the mold away from the block 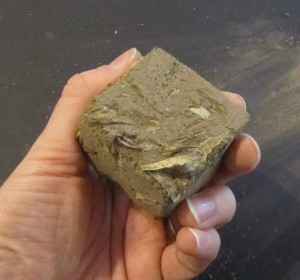